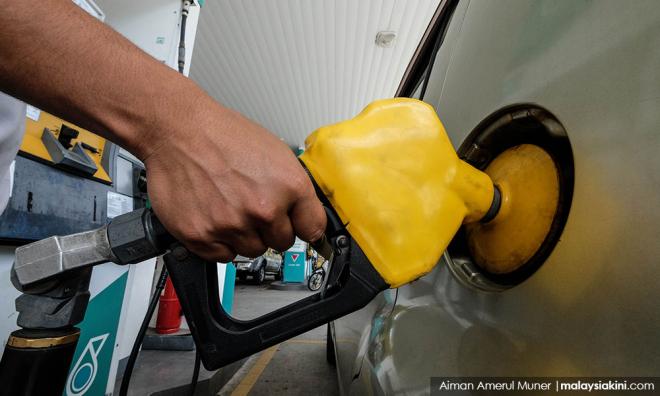 The Pakatan Harapan government has been imposing a fuel tax of 30 sen per litre on the rakyat since November, claims former prime minister Najib Abdul Razak.

"Yesterday, the Brent (crude oil) price was around US$52 per barrel.

"As a comparison, the Brent price when BN lost was US$73 per barrel and the price of RON95 was RM2.20 per litre.

"This means that since early last month, the Pakatan Harapan government has imposed a tax of RM0.30 per litre on RON95," he said in a posting on his Facebook page today.

According to Najib, the real price of RON95 should be between RM1.90 and RM2 per litre since last month.

The Harapan administration has maintained the price of RON95 at RM2.20 per litre since assuming federal power in May.

The last time the price of RON95 was changed was on March 22, during the weekly managed float system utilised by the BN administration.

The system had been in place since December 2014 following the withdrawal of government subsidies, but prices were frozen in the weeks leading up to the 14th general election.

Najib claims that due to this, the Harapan government collects RM120 million from the sale of RON95 every week, and noted that the coalition promised to lower the price of petrol on the election campaign trail.

"That is why the rakyat has the right to urge the Harapan government to stop the tax on RON95 and allow the rakyat to enjoy the lower petrol prices due to the falling global price of oil," he said.

Former PKR vice-president Mohd Rafizi Ramli, however, had previously pointed out that the RM1.50 per litre fuel price promise was made for the 2013 general election when crude oil prices were low.

'Not a single sen of tax'

Najib also questioned why Putrajaya is only planning to put RON95 back on a managed float as part of its targeted fuel subsidy scheme in the second quarter of 2019, as opposed to the current festive period.

The former premier also claimed that he had never imposed a single sen of tax on RON95 when in power, despite oil prices going up as high as US$120 per barrel.

Rafizi has claimed several times, however, that Najib's administration had also imposed a hidden fuel tax.

In a separate statement, MCA president Wee Ka Siong also urged the Harapan government to confirm whether the price of RON95 price should be around RM1.90 per litre.

"If you have been collecting fuel tax in these two months and not giving subsidies as you promised, at least be brave in telling the rakyat the truth," he said.

Like Najib, Wee also claimed that the BN government has never once imposed a tax on RON95.