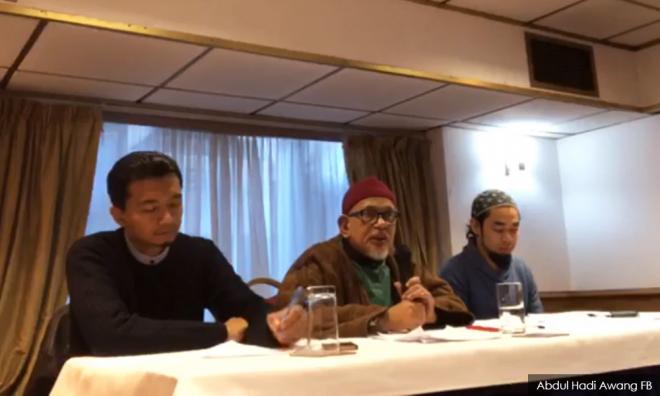 Tempers flared at a dialogue session with PAS president Abdul Hadi Awang in London yesterday, when an audience member asked why the former was being "racist" and against local council elections.

Hadi answered the question calmly, arguing that local elections must be inclusive so that cities are not dominated by just one race.

"When an election is contested only by residents (and does not include those who serve the residents), it is certain that big cities such as Kuala Lumpur, Ipoh, Penang, Seremban, and Johor Bahru would be dominated by DAP Chinese.

"They can make alcohol and gambling permissible," he said.

"So an election must involve the taxi drivers, traders, and all those who make a city alive.

"If only one race is in power, then a situation like in (May 13) 1969 may arise again, we don't want that," he added, referring to the race riots that year.

The mention of May 13, however, incensed the man who asked the question.

The man responded by verbally abusing Hadi, saying the latter's following of the Quran had caused his mind to be "stuck in 1969."

"If you want Malaysia to progress and compete with other nations, you have to get out of your coconut shell," the man shouted.

When another audience member asked him to calm down, the man responded with a barrage of expletives, telling the other individual to mind his own business.

The man – who claimed to have raised funds for PAS in 2013 – then challenged the other audience member to meet him "outside," before calling Hadi a racist and another derogatory term.

Hadi responded by saying "I am not a racist, May 13 did not happen in Kelantan and Terengganu... The Chinese and Indians there were not harassed."

He then reiterated his belief that local council elections must be inclusive, so that no one race controls the cities, as this can cause tension.

He also said that the freedom of other races would not be impeded, giving the example of non-Muslims in Kelantan and Terengganu being allowed to consume alcohol.

"We don't restrict the freedoms of other religions, but they must be aware of the sensitivities of those around them," he said.

However, Zuraida said she would continue to push for local elections, and will take into account local factors.