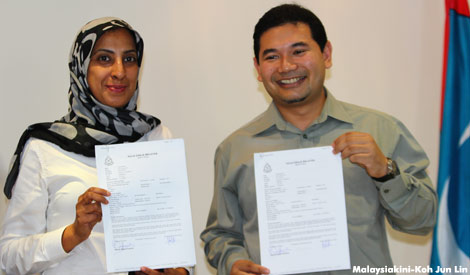 Yoursay: Allow Latheefa, Rafizi freedom to voice out their opinions

YOURSAY | ‘Sometimes, going through the right channels may result in nothing.’

Justice: PKR member Latheefa Koya should file a formal complaint with PKR's disciplinary committee or bring up her complaint of alleged nepotism and cronyism by PKR president Anwar Ibrahim in appointing party state leaders with the political bureau or central committee - the majority of whom comprises her and deputy president Azmin Ali's faction.

Anonymous_1538808416: I agree, Latheefa should follow the party code of conduct and go through proper channels to express her grievances.

If everyone acts like Latheefa, there will be no rules and no control. Members who are unhappy can go straight to the press.

If this is called ethical, then there is no need to have codes or standard operating procedures. If, after highlighting her grievances and no action is taken, then it makes perfect sense to go to the press or escalate it through another channel.

Anonymous_1e23ccf0: Latheefa is a person who calls a spade a spade and going through the right channels may have very well amounted or resulted in nothing.

That's not to say that she was correct in her assertions (I don't know if she is) but she obviously believed that things were not right and it was her duty to speak out and she did; all for the good of the party and the country.

Caripasal: Constructive criticism is acceptable. However, nothing good was coming out from her about Anwar and his family. Whatever she said was close to defamation, if not already. It was a personal attack with an agenda.

She is the spokesperson of the opposite camp in PKR. Has she ever criticised Azmin? She should be expelled from PKR. She can continue criticising Anwar as an outsider.

That's how former Umno president Najib Abdul Razak became a dictator and no one could question or criticise him about 1MDB and other corruption matters linked to him.

Don't you people at PKR ever learn anything at all?

Alfanso: This is interesting. Latheefa ought to know that politics is a game of power and self-interest.

Who is going to care for public interest? No one. And so, we are seeing the change - it is not what Latheefa is saying is wrong, but the culture and the failure of correction when seeking to undo a wrong seem not acceptable.

Then what? There is no prospect of learning and progress.

VP Biden: PKR vice-president Nurul Izzah Anwar is up there because of her calibre not because of her father. All the Penang PKR divisions want her. Her ascendancy is well supported by the rakyat.

Latheefa, your outrage in this matter is misplaced and clearly an attention-seeking stunt. You are clearly not a team player.

Hplooi: Latheefa, speaking out is a right which should be sacrosanct in a functioning democracy. However, you are supposed to be a public figure and a politician. So whatever you speak has public implication and impact.

Public figures and politicians are expected to speak intelligently and in measured ways, not shill and engage in unsubstantiated attacks. Just leave teh-tarik-stall-talks to non-persons like us. You are supposed to be held to a higher standard.

If every public figure shill like the 'stable genius ensconced in the White House', then the public political narrative will descend into chaos.

The Wakandan: I’m not a terrible fan of Latheefa, but I would grudgingly give her the freedom to speak her mind. That is what we are about.

The only thing is whether she had been discreet enough but for that only she is accountable for what she says and does.

The PKR election was doomed with controversy from the start so it is difficult to say who is right or wrong. There is some truth on what she said about the selection made by Anwar but then again that depends on which side you are from.

Ultimately, everyone should be judged by the same standard in PKR, and as it is, they have become very chaotic, unruly, undisciplined, disorganised, conflicted and bickering.

So, please do not use the words 'contemptible Umno-style tactic'.

Nurul is an achiever in her own right and she is anytime a better speaker and leader. That is my opinion and I have a right to voice it.

David Dass: Rafizi Ramli, when you are inside the ruling party and criticise them as if you are on the outside it can become confusing. It suggests conflicts within the ruling party.

One would expect table thumping behind closed doors. But when decisions are made and policies are formulated and announced, we expect unison and collective responsibility.

Of course, those outside of government - the media and the man in the street can criticise. They are some of the checks and balances necessary in a vibrant democracy.

And of course, there is the opposition. They have a role to play. One cannot, however, be in the ruling party and behave as if one is in the opposition.

Casey: When Rafizi started to adopt as a mission, of his political struggle, to see to Anwar’s ascension to the “throne”, he started to cloud his judgement with bias, and tainted his actions with acridity.

It is obvious that Team Rafizi, having lost big time in the party election, is now at a crossroad. The options are limited, and to ensure his own political survival and relevance, we can expect Rafizi to take advantage of seemingly, or at times chaotic situations of a government no older than seven months.

Empirical evidence, the world over, would show that the popular opinion of a new government or a new head of state would be at its euphoric peak, fresh from an electoral victory. However, this popular rating would drop as the dust settles.

Granted that the rakyat at large is eager to see miracles happening with the emergence of a New Malaysia happening, if possible, overnight - albeit the definition of the New Malaysia may in itself varies among the wide and diverse spectrum of stakeholders.

Be that, and objectively, is there any reason to doubt that change, for the better, has started to take shape pre-509?

The composition of the cabinet (the upper echelon of the government) in itself has demonstrated the political will to change to a large extent. It is up to them to do their job.

Jasmine: Keep going Rafizi, regardless of your detractors. There will always be critics and you surely are well aware of that.

While I am no fan of politicians, including you, some of course, are adherents of doublespeak. They espouse freedom of expression, even to the extent of criticising publicly their cabinet colleagues, but decry the same when the guns are trained against them or their administration.

Some obviously have such forked tongues because of their belief that defending their bosses will bring them fortune and future favours.

However, in being critical of all that is and could go wrong, you should also not be seen to be merely out feathering your nest in the process.

Be courageous but let it be in the fight for the rakyat’s benefits.

yoursay
latheefakoya
rafiziramli
pkr
Related Reports
I'll keep speaking up to keep gov't in check, Rafizi tells detractors
2 years ago
Rafizi should help uplift Harapan instead of running it down - Redzuan
2 years ago
PKR grassroots: Latheefa's public criticism of Anwar unwarranted
2 years ago
There's something about Nurul Izzah and Latheefa
2 years ago