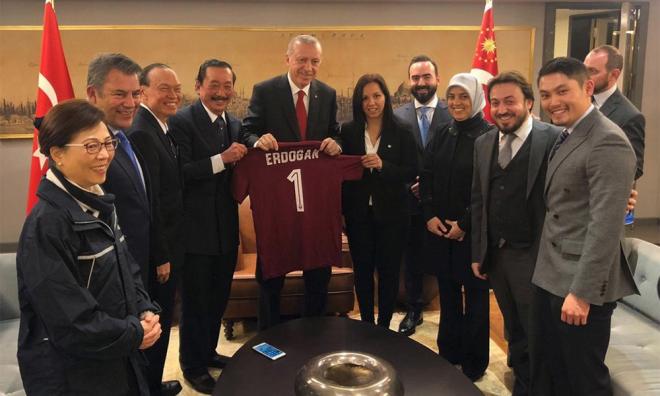 President Recep Tayyip Erdogan has given a boost to humanitarian relief work by the Tzu Chi Foundation for Syrian refugees in Turkey, thanks to the initiative of Malaysian corporate leader Vincent Tan at their meeting at the president's office on Saturday night.

Tan, who is leading a three-day visit by Malaysian volunteers of Tzu Chi to distribute aid to the refugees in Turkey, said he could not have hoped for a more successful mission, capped by his meeting with Erdogan.

Tan also had another reason to be in a jubilant mood when he met Malaysian reporters covering the mission after his 45-minute discussion with Erdogan.

His meeting with the president ended just as the English Premier League football away match between Cardiff City, which he owns, and Leicester entered its final minutes.

"When I came out of the room, the match was shown on television at its 89th minute with the 0-0 scoreline. And then Cardiff scored in injury time to win the match.

"Even Lim Wee Chai, who has never watched a football match before, said it was a beautiful goal, and we hugged each other," he said, referring to the Top Glove Corporation founder who was also present at the meeting.

Football was very much on Erdogan's mind in his talks with Tan with the Turkish leader, himself a former football player, suggesting to the latter that he acquire a Turkish football club as well.

Asked his reaction to this, Tan said: "Insya Allah."

He presented Erdogan with a Cardiff City jersey that had the president's name and the number 1 emblazoned on it.

Tan was even more upbeat about his meeting with Erdogan whom he described as a first-class leader with a big heart and a doer.

Tzu Chi is based in Taiwan, but has volunteers in 57 countries, including Malaysia, and, since its founding 52 years ago, has extended humanitarian aid for disaster and war victims in over 100 countries.

Tan, an accredited volunteer, said Erdogan brought some good news that would go a long way towards sustaining Tzu Chi's operations in Turkey.

The country is hosting 4.5 million refugees, of whom 3.6 million are Syrians who fled their homeland due to the prolonged civil war.

One issue raised during the meeting was the quota of just over 500 students that could be registered by the Turkish authorities to follow the American advanced education system for an international school that Tzu Chi runs in Istanbul for refugee children.

There are now over 2,000 such students and Tzu Chi wants to raise the quota to 3,000 to allow for future expansion.

Tzu Chi spends over US$550,000 (about RM2.28 million) monthly to run the school and a well-equipped clinic in the Turkish capital.

The Berjaya founder said Erdogan immediately approved Tzu Chi's request for the extra quota and even granted a piece of land for it to build its school here which now occupies rented premises.

"During our meeting, Erdogan called in his aide and instructed him to facilitate our requests as well as our future needs. Our mission here has been very successful and we have achieved more than what we expected," said Tan.

Faisal Hu, a Muslim Taiwanese who heads the Tzu Chi operation here and who also attended the meeting, said he cried as he was so touched by Erdogan's kindness.

"'The students' dreams have come true and I am sure they will all cry with joy when they hear this," he added.

Tan also wants to inspire other Malaysian organisations and individuals to do their bit to relieve the trauma and distress of Syrian refugees in Turkey who had to flee the war penniless and with just the clothes on their backs.

"There are so many wealthy Malaysians who are golfing around the world. Why not come here and see for themselves the situation and do some humanitarian work.

"This will also boost bilateral ties between Turkey and Malaysia.

"Erdogan is a good man who is doing as much as he could to help the Syrian refugees," he said.

Tan said he told the president that Berjaya would also be looking at investing in Turkey especially in the hotel sector and tourism-related industry that would provide jobs for both the Turkish population and Syrian refugees.

Tan and Lim, two of Malaysia's richest men, on Saturday led the volunteers to visit several families of the refugees in their rented apartments to see for themselves their living and health conditions.

Later, at the school run by Tzu Chi, more than 3,000 refugees received a cash donation for their living expenses. More refugees are expected to receive such aid on Sunday.