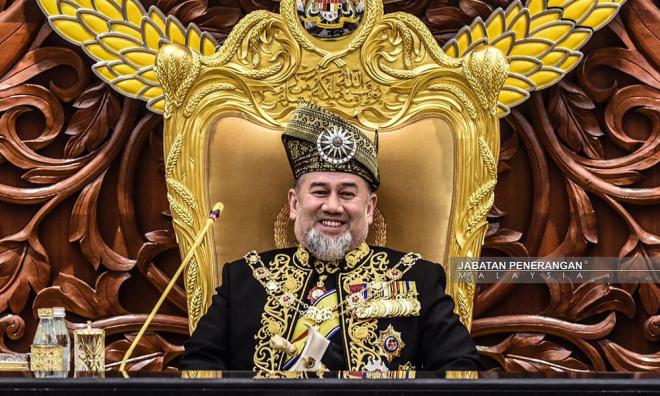 Malay rulers met amid speculations on status of Agong - report

A group of Malay rulers met in Kuala Lumpur last night amid speculations raised over the status of the Yang di-Pertuan Agong.

The New Straits Times today quoted sources who confirmed the unofficial meeting had taken place following the end of the duties of Perak's Sultan Nazrin Shah as acting Yang di-Pertuan Agong in the absence of the Agong, Sultan Muhammad V.

Unlike the scheduled Conference of Rulers meeting, the report said there was no requirement for the prime minister or other officials to be present, and that it was rare for such a meeting to be called.

"Such meetings are usually held once or twice a term, and normally it is to discuss something important.

"There was no such meeting last year," the source was quoted as saying.

Another source, who also confirmed to the NST that the meeting took place, indicated that a "serious discussion" was held over a matter regarding the monarchy.

"Yes, the meeting was held last night. A serious matter was discussed. We want to know where we are heading concerning this matter," the source said.

However, the source reportedly declined to confirm whether the Agong was present at the meeting.

"The others (rulers) were present. But you have to ask Istana Negara. I cannot tell you (whether the Agong attended the meeting)," added the source.

Malaysiakini has contacted Istana Negara for confirmation on the matter.

Sultan Muhammad V had been on two month’s leave until Dec 31 for medical treatment, during which Sultan Nazrin had been appointed to exercise his functions.

Various foreign media had reported that the Kelantan ruler married former Russian beauty queen Oksana Voevodina in Moscow on Nov 22, although there has been no official confirmation of this from the palace.

Sultan Nazrin ends duties as acting Agong
31 Dec 2018
PM: No official confirmation on reported wedding of Agong
29 Nov 2018
Agong will not be conferring titles on his birthday
24 Aug 2018
Agong urges parliamentarians to work towards unity
17 Jul 2018