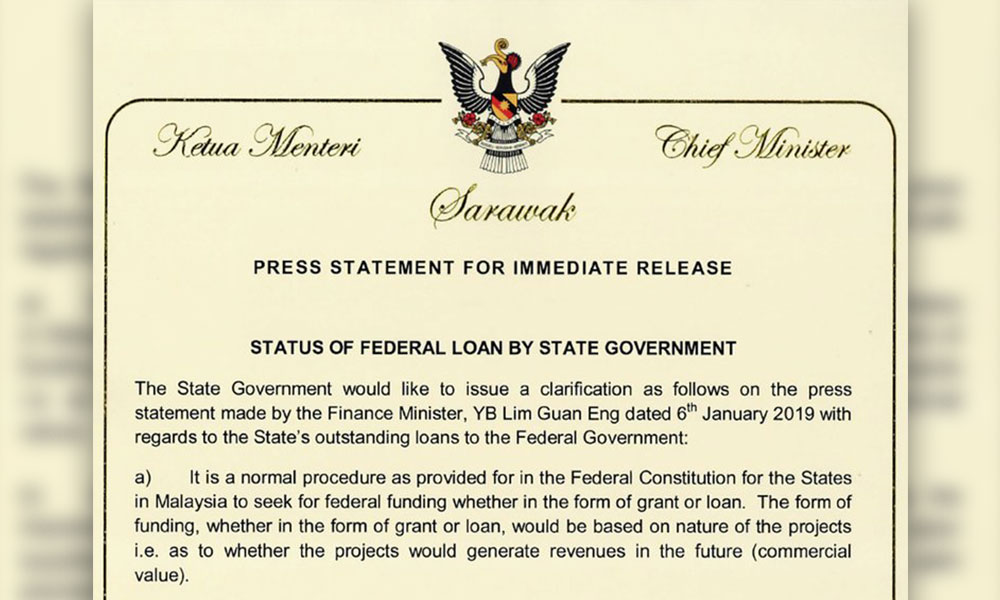 The Sarawak government has been repaying its loans to the federal government in accordance with its repayment schedule, the Sarawak Chief Minister’s office said in a statement today.

It said that as of Dec 31, 2018, the state government owed RM2.38 billion to the federal government and has allocated enough funds in its annual budget each year to repay these loans.

“In fact, Sarawak is one of the states which has no outstanding/arrears in loan repayment.

“This has been reported by the auditor-general's department in its annual report and presented to the National Finance Council,” it said.

Lim’s statement was made in response to Sarawak Tourism, Arts, Culture, Youth and Sports Minister Abdul Karim Rahman Hamzah who claimed that Putrajaya owed the state RM2.32 million for its share of taxes collected from January until September last year.

In its statement today, the Sarawak Chief Minister’s Office said it was normal procedure for state governments to seek federal funding whether in the form of a grant or a loan and this is provided for under the Federal Constitution.

In Sarawak’s case, it said, the loans were obtained to finance the implementation of various projects that are listed in the constitution as responsibilities of both federal and state governments.

These include the supply of water, sewerage facilities, the building of industrial estates and housing and agriculture.