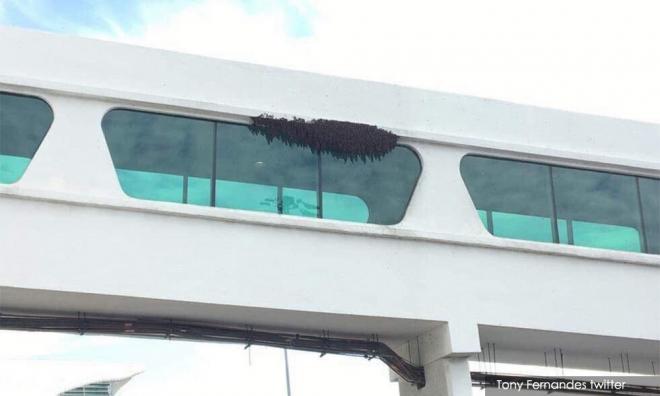 In a stinging rebuke against the management of KLIA2, Air Asia Group CEO Tony Fernandes today lamented the discovery of what appears to be a swarm of bees on a window at one of the airport's buildings.

Taking to Twitter, Fernandes shared a photograph of the bees, which was purportedly taken at KLIA2.

“Now we have bees in KLIA2. We got maggots, rats and now bees.

“Maybe a zoo or KLIA2 honey. Could be a new income which could reduce airport tax,” he quipped in reference to previous reports on pest and vermin infestations at the airport.

However, Fernandes said, the latest alleged incident could pose a serious threat to public safety.

“Jokes aside, this is dangerous for my passengers and my staff. Will the non-communicative new CEO solve this?” he asked.

In response, Malaysia Airports Holdings Bhd (MAHB) said they were aware of the situation, and that it was “quite common” for migrating swarms of bees to congregate at airports.

”They (the bees) would normally disperse when there is rain or heavy wind.

”We monitor such situations and if they do not disperse by nightfall, we will get pest control to fumigate as to avoid the formation of a beehive,” said MAHB in a statement posted on its Twitter account.

”Such (fumigation) activities are normally done at night for safety reasons as it would be hazardous to disturb the swarm during the day.

”In this particular case, the swarm had appeared between 10am to 11am this morning,” said MAHB, adding that it has made preparations to fumigate the bees by tonight if the swarm still remains.

MAHB, as KLIA2’s operator, had previously taken to Twitter to respond to a passenger who made a public complaint about a rat discovered in one of its lounges.

Responding to the incident, which occurred late last December, MAHB at the time said it has carried out regular pest control activities under the supervision of the Health Ministry's communicable disease control division.