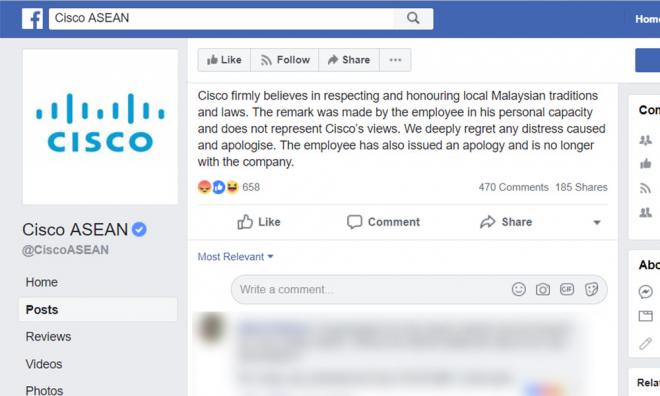 Man who insulted ruler no longer with us, says firm

However, the firm did not clarify if the man's employment had been terminated or if he resigned.

“Cisco firmly believes in respecting and honouring local Malaysian traditions and laws. The remark was made by the employee in his personal capacity and does not represent Cisco's views.

“We deeply regret any distress caused and apologise. The employee has also issued an apology and is no longer with the company,” the posting read.

Various quarters had called for action to be taken against the individual, who made a disparaging remark on Facebook in response to a news report on Sultan Muhammad V resigning as the Yang di-Pertuan Agong.

The man later retracted his posting and apologised.

An Umno Youth delegation had also submitted a memorandum to the Cisco System office in Kuala Lumpur.

Prior to that, Umno Youth chief Asyraf Wajdi Dususki had said that the police must act against the man.

Asyraf had described the comment, which linked the ruler's resignation to sex, as an “extreme form of insult and slander”.