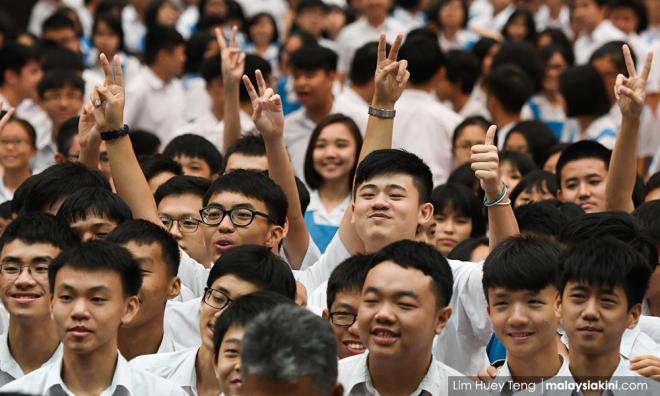 Gerakan deputy president Oh Tong Keong has accused Putrajaya of being insincere in its pledge to recognise the Unified Examination Certificate (UEC).

In a statement today, Oh said that the government is only "hoodwinking" the Chinese community into thinking that it would recognise the certificate for entry into public universities.

“Our country's Deputy Education Minister Teo Nie Ching and DAP adviser Lim Kit Siang have said repeatedly that Pakatan Harapan will recognise the UEC, that they are optimistic about it.

"However, reality shows otherwise, with Prime Minister Dr Mahathir Mohamad's statements proving Harapan does not plan to recognise the UEC, they only intend to assist the Malays instead of (taking into account) the interests of all races,” he said.

The prime minister was initially reported as saying that the feelings of the Malays need to be taken into account before the exam certificate can be recognised.

The statement caused an uproar among the Chinese community, after which the Prime Minister’s Office produced an audio recording of the interview.

Mahathir later clarified that the sensitivities of all races, and not just the Malays, must be considered before the government could recognise the UEC.

In his statement, Oh (photo) also accused the DAP of only knowing how to "lie, lie and lie" in reference to using the UEC recognition issue to placate Chinese voters.

The Gerakan leader also urged the Chinese community to unite, saying Chinese organisations such as Dong Jiao Zong, Hua Zong and others should put pressure on the Harapan government to fulfil their election pledges.

"The recognition of the UEC is a must, stop giving excuses to the Chinese community.

“We do not object to the government helping those needy and poor Malays.

"Assisting poor Malays and recognising the UEC are two different matters, Mahathir should not confuse the public," he said.

Oh also urged DAP leaders to come clean on whether Putrajaya actually intends to recognise the UEC, and asked Mahathir to be a prime minister for all Malaysians, and not just one community.

"Individuals with a conscience in DAP should not remain silent, they should come out and say ‘no’ to Mahathir."

Sin Chew claims Mahathir misled over UEC issue
5 Jan 2019
Will the UEC level the job market playing field?
5 Jan 2019
UEC remarks: Sensitivities of all races will be considered, clarifies PM
4 Jan 2019
What did Mahathir say about the UEC?
2 Jan 2019