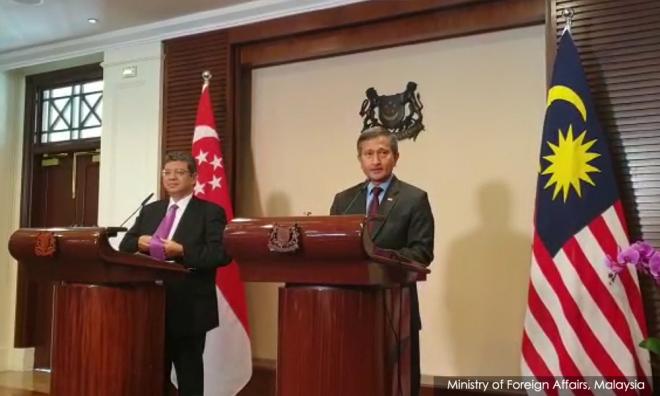 Malaysia and Singapore today agreed to immediately and simultaneously suspend the former's permanent restricted area over Pasir Gudang, and the latter's implementation of the Instrument Landing System (ILS) procedure for Seletar Airport.

Both the suspensions are for a period of one month in the first instance, according to a joint statement issued after the bilateral meeting between Foreign Minister Saifuddin Abdullah and his Singapore counterpart Vivian Balakrishnan in the republic.

According to the statement, it was agreed that the transport ministers of the two countries should meet soon for discussions on the restricted area and the ILS procedure to ensure the safety and efficiency of civil aviation.

On maritime issues surrounding the Johor Bahru and Singapore port limits, the two ministers agreed to establish a working group headed by the secretary-general of the Foreign Ministry and the permanent secretary of the Singapore Ministry of Foreign Affairs.

The working group will study and discuss the legal and operational matters in order to de-escalate the situation on the ground, and provide a basis for further discussions and negotiations, read the statement.

The working group is to report to the foreign ministers within two months, it added.

The implementation of the ILS at Seletar Airport in Singapore had aircraft landing at the airport using Malaysian airspace over Pasir Gudang, which Malaysia objected to.

Singapore and Malaysia had also blamed each other for what both insisted were extensions of port limits, that were seen as violations of sovereignty and international law.

At a joint press conference, Saifuddin said that his meeting with Balakrishnan this morning was very cordial and friendly.

"We have a long history of good relations and there is only one way to go forward... that is to become stronger in our ties and improve our relations," said Saifuddin, adding that both sides were pleased with the outcome of the discussions.

”The measures that we agreed upon are positive, and there are constructive steps towards calming the situation on the ground, and we believe these will provide a constructive environment for both countries to find a mutually agreeable solution to our bilateral issues."

The meeting between the two ministers, and a subsequent delegation meeting, were held at the Singapore Ministry of Foreign Affairs.

Meanwhile, Balakrishnan (photo) said that Malaysia and Singapore will always be close and permanent neighbours.

“That is a geographical fact. And it is essential that we always have a constructive and cooperative bilateral relationship.

"Both of us, my brother Saifuddin from Malaysia and I… we had a very positive, very constructive and very necessary meeting today.

"And I'm glad to be able to report that we've arrived at some agreements, and we've also just as importantly reaffirmed our commitment to strengthening the vital relationship between Malaysia and Singapore, and also to improve bilateral ties on the basis of equality and mutual respect."

How will Singapore discuss “in good faith”?
13 Dec 2018
The importance of being 'chill' in the row with Singapore
11 Dec 2018
Singapore: No objection to Loke's tell-all, but why stop at letters?
10 Dec 2018
Singapore: Airspace and JB port limits issues should be discussed constructively
5 Dec 2018