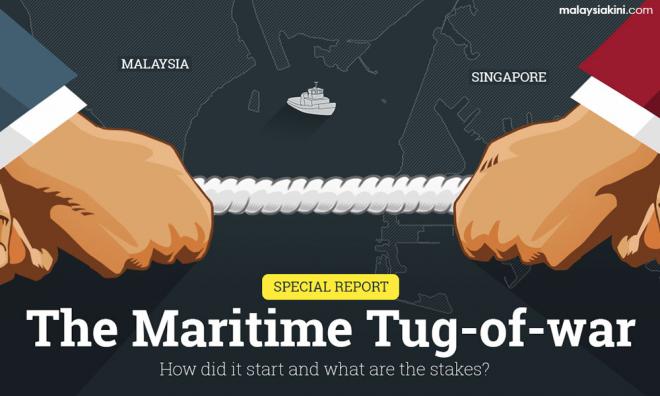 KINIGUIDE | Malaysia and Singapore are now engaged in yet another diplomatic row, this time over the limits of the Johor Bahru port and Singapore.

The latest dispute is taking place on the Johor Straits' western entrance, just off Tuas in Singapore.

It is one of two territorial disputes between Malaysia and Singapore that surfaced this month, with the other revolving Seletar Airport’s new Instrument Landing System (ILS) procedures.

Malaysia and Singapore share a mutually agreed border, based on a treaty signed between the two countries on Aug 7, 1995.

However, there are still portions of the Malaysia-Singapore border where there is no mutual agreement.

The latest dispute started in 2002 when Singapore revealed its plan to reclaim the sea around Tuas.

Malaysia claimed it would hamper access to its ports and damage the environment in the Johor Straits.

The case went to the International Tribunal for the Law of the Sea in Hamburg, Germany, on Oct 8, 2003.

A compromise was eventually reached and a settlement was inked on Sept 1, 2005, where both countries agreed to address the environmental and safety concerns over the Tuas reclamation.

As part of the settlement, both parties also agreed to settle outstanding maritime boundary issues through “amicable negotiations.”

However, a Malaysian government official, speaking on condition of anonymity, told Malaysiakini that those negotiations have not taken place.

In the meantime, both sides have declared precise boundaries for their ports, but have avoided the waters off Tuas due to the continued ambiguity.

This resulted in a gap area between the Johor Bahru port limit and the Singapore limit which is not controlled by any port authority.

Nevertheless, both Malaysia and Singapore still claim it as their territorial waters.

On Oct 25, the Transport Ministry of Malaysia gazetted the new limits for the Johor Bahru port.

This expands the Johor Bahru port limits near Tuas until it meets the Singapore port limits – a distance of up to 2.8km.

A Malaysian official told Malaysiakini that the expansion was to deal with illicit activities in the area.

The official said Malaysia had monitored the area for months and found that it was unpatrolled.

However, the Singapore High Commission said this is inaccurate.

In a statement to Malaysiakini, it said that the republic has continuously exercised its jurisdiction in the area without any protest from Malaysia.

“Singapore’s security agencies have also been patrolling the area regularly,” it added.

The high commission also said that Malaysia had never claimed the waters covered by the recent purported extension of the Johor Bahru port limit.

“The purported extension of the Johor Bahru port limit and the intrusions by Malaysian government vessels into Singapore territorial waters around Tuas are a serious violation of Singapore’s sovereignty and international law,” it stressed.

Malaysia notified the maritime community regarding the change in port limits through a port circular on Nov 11, 2018, and a notice to mariners on Nov 22.

It said Singapore’s territorial waters extend westward beyond its port limits near Tuas, and ships in the area are to comply with Singaporean law.

It also told ships conducting ship-to-ship transfers within the Johor Bahru port limits to remain in place, unless the department allows otherwise.

On the same day, Singapore went public with its objections. This is the first time the dispute was highlighted in the press.

Malaysia denied encroaching on Singaporean waters and said those waters had always been Malaysian territory and Singapore's reclamation activities did not mean it could extend its territorial borders.

Singapore disagreed, and insisted that its territory extends westward from its port limits off Tuas.

At this point, Johor Bahru’s and Singapore’s port limits have an overlap of over 1,100ha.

Singapore Transport Minister Khaw Boon Wan said the expansion was made in response to repeated intrusions by Malaysian government vessels in those waters.

He urged Malaysia to cease its “intrusions” and return to the status quo prior to Oct 25, 2018, while further negotiations take its course.

MPA announced the expansion to mariners on the same day and reminded them to comply with “applicable port regulations” when within its port limits.

On Dec 7, 2018, Malaysia proposed that both Malaysia and Singapore refrain from sending more ships into the disputed area, pending settlement of the dispute.

Singapore turned down the proposal.

Malaysia refused Singapore’s proposal to revert to the pre-Oct 25 port limits while the matter is still being discussed.

Both sides are now trying to de-escalate tensions.

On Malaysia’s part, it has reduced its presence in the disputed area but refused to withdraw completely.

Sources have told Malaysiakini that some good can come out of the standoff. It is hoped that the standoff will force Singapore to the negotiation table.

They claim that despite a previous agreement to negotiate the maritime border off Tuas, Singapore has to date refused to do so.

However, the Singapore High Commission dismissed the allegation, saying that before Oct 25, 2018, Malaysia had never claimed the waters around Tuas and there had thus been no unresolved issue between Malaysia and Singapore over these waters. Moreover, Malaysia has never proposed any boundary negotiation with Singapore on the basis of the 2005 Settlement Agreement.

“Singapore has always been open to finding an amicable resolution of issues between Singapore and Malaysia in accordance with international law, and in the spirit of preserving our important bilateral relationship,” it said.

It also claimed that the said area “indisputably” belonged to Singapore.

Officials from both countries are now set to meet in the second week of January 2019 to negotiate the impasse.

This instalment of KiniGuide compiled by KOH JUN LIN.