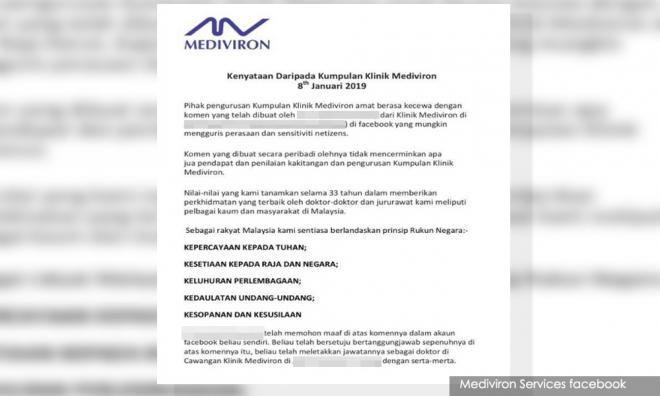 The Mediviron Group of Clinics has confirmed that a doctor with its branch in Kajang has resigned following the outcry over his allegedly offensive remarks against former Yang di-Pertuan Agong Sultan Muhammad V.

According to Malay daily Sinar Harian today, Mediviron said in a statement that the doctor, who posted the remarks on his personal Facebook account, tendered his resignation yesterday, with immediate effect.

"The management of Mediviron Group of Clinics deeply regrets the comments made by the doctor, which had hurt the feelings and sensitivity of the people.

"The values we instilled for 33 years in providing the best service by our doctors and nurses encompass various races and are based on principles of the Rukun Negara.

"The doctor has also apologised for his comments on his personal Facebook account and agreed to take full responsibility," Mediviron added in the statement.

Following the unprecedented resignation of Sultan Muhammad V as the 15th Yang di-Pertuan Agong, several other individuals were also targeted for their allegedly offensive remarks made on the matter.

Yesterday, US-based multinational company Cisco Systems Inc confirmed that a man targeted for insulting the Kelantan sultan was no longer with the firm, although it did not clarify whether the man's employment had been terminated or if he resigned.

Also yesterday, Tenaga Nasional Bhd said it had suspended an employee with immediate effect after an internal investigation found that she had insulted the royal institution on social media.

M'sians bombard Cisco's FB page over royal insult
7 Jan 2019
Umno Youth: Cops must act on man who insulted ruler on FB
7 Jan 2019
'Stepping down of Agong done in a courteous manner'
8 Jan 2019
Sadness, shock over the resignation of the Agong
6 Jan 2019