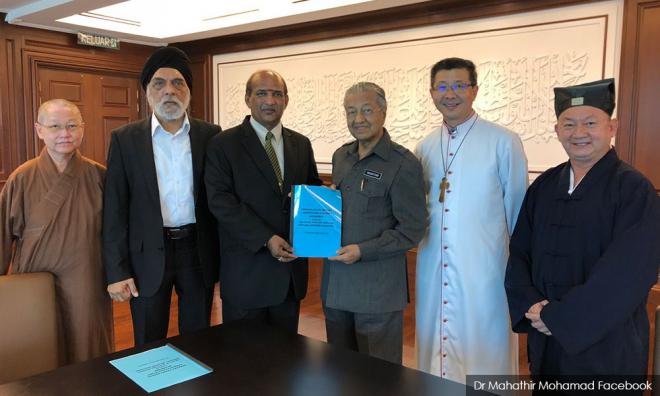 Dr M: Gov't sensitive towards all faiths, all must obey rule of law

Prime Minister Dr Mahathir Mohamad has vowed that his government will be sensitive towards all religions.

“At the same time, every one of us must obey the rule of law,” he added in a Twitter post this afternoon.

The posting came after his meeting with council members of the Malaysian Consultative Council of Buddhism, Christianity, Hinduism, Sikhism and Taoism (MCCBCHST) at his office in Putrajaya.

The prime minister said despite the differences, Malaysia is more peaceful than some countries in terms of racial harmony and religious tolerance.

MCCBCHST vice-president Sardar Jagir Singh said Mahathir assured the government will be inclusive of all.

“We discussed various issues of concern and an inclusive Malaysia. Tun (Mahathir) heard all issues patiently and said he would personally look into them.

“He also affirmed that the Harapan government will be inclusive and will be guided by the Federal Constitution and the rule of law,” he told Malaysiakini when contacted.

Recently, the Mahathir administration had courted brickbats over its stand on the International Convention on the Elimination of All Forms of Racial Discrimination (Icerd).

Following vociferous objections from Umno, PAS as well as Malay and Muslim movements, the government announced that it would not ratify the convention.

Those opposing the ratification of the convention argued that it would threaten the special position of the Malays and Islam.

Meanwhile, those who pushed for the ratification accused the government of backtracking on its pledge and caving in to pressure from certain quarters.

Following this, DAP veteran Lim Kit Siang, who criticised those who raised the May 13 incident to justify a decision in the past, chose to raise the spectre of violence himself over the Icerd issue.

Lim said Malaysians would not want Icerd to be ratified at the expense of another May 13 episode and noted how certain groups were seeking to incite and escalate racial and religious distrust over the issue.