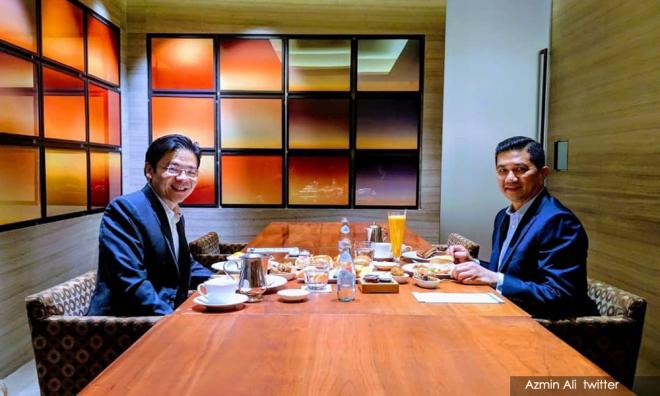 Maintaining strong ties between Singapore and Malaysia is in the best interests of both countries, said Economic Affairs Minister Azmin Ali.

“We are each other’s closest neighbour connected by deep historical ties and family bonds. Let's work things out for the well-being and future of our people,” he said in his latest Facebook update late Sunday.

Azmin is in Singapore for a bilateral visit despite the postponement of the 14th meeting of the Joint Ministerial Committee for Iskandar Malaysia (JMCIM), which was originally scheduled for today.

“I am confident of the positive approach taken by our two countries to overcome any bilateral issues. Looking forward to my meetings with Singaporean ministers tomorrow (Monday),” he wrote.

Azmin was expected to have led the Malaysian delegation to the JMCIM meeting.

However, both countries had mutually agreed to postpone the meeting.

Last Saturday, Azmin told reporters in Tanah Rata, Cameron Highlands, that the meeting was postponed because certain issues to be discussed in the JMCIM meeting were closely related to matters already raised in a bilateral meeting between Malaysian Foreign Affairs Minister Saifuddin Abdullah and Dr Vivian Balakrishnan last Tuesday (Jan 8).

Azmin had a meeting with Balakrishnan on Sunday evening over dinner and described it as“productive”.

“Productive meeting with Dr Vivian Balakrishnan, Singapore minister for foreign affairs, this evening as we work towards resolving some bilateral issues,” he said in his posting which was appended with three photos of him and Balakrishnan.

Meanwhile, Balakrishnan said that he “had a good meeting of minds”.

“We had an open and candid discussion of the issues currently confronting us,” he wrote on his Facebook late Sunday.

“We reaffirmed that there are far more opportunities for Malaysia and Singapore to work together, especially at this time of global economic transformation,” he said in his posting which was accompanied with a photo of him with Azmin strolling along the Singapore River.