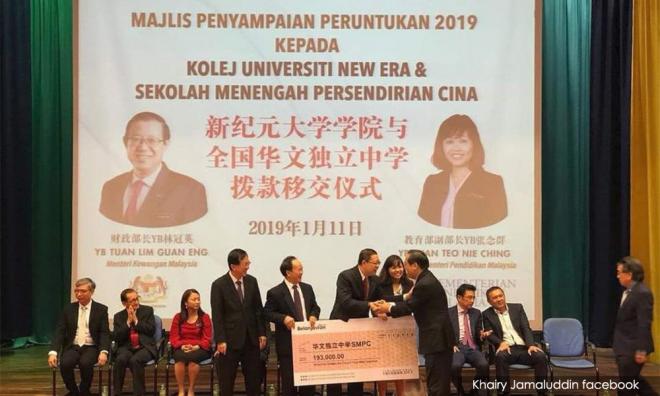 There are increasing calls for the Finance Ministry to explain why public funds are being channelled to a private college.

In a statement today, PAS information chief Nasrudin Hassan asked why was New Era University College included in the list of institutions which received the funds.

He said based on the statements made by Deputy Education Minister Teo Nie Ching, the money for New Era University College was part of a "special allocation" from the Finance Ministry.

"The question is: Why were the funds given and where did it come from?

"Additionally, New Era University College was established by Dong Jiao Zong (DJZ) in 1994. DJZ had aggressively sought the government's recognition of the United Examination Certificate (UEC), although it was rejected by the prime minister," wrote Nasruddin.

Lim had, in fact, responded yesterday, explaining that funding was given to New Era University College because it was a non-profit.

He added that the previous administration funded private colleges before, pointing to how between RM30 million to RM69.25 million was spent on Tunku Abdul Rahman University College between 2012 and 2018.

According to the Budget 2019, the federal government had introduced five new types of schools eligible for funding to be used for upgrading or maintenance works.

In a separate statement, the youth wing of Parti Ikatan Bangsa Malaysia chided Lim for bringing in Tunku Abdul Rahman University College into the picture.

"It is childish to justify current actions by referring to what the previous BN administration did," said Ikatan Youth leader Shahir Adnan.

He argued that New Era University College should not be given federal government funding because it was promoting Chinese education and not the national syllabus.

"Ikatan Youth believes that inter-ethnic unity should start in schools. Where there are different streams, especially Chinese private schools, which does not follow the national syllabus, our children will be divided," said Shahir.

Meanwhile, many social media users have been complaining that the funding for New Era University College was wrong on grounds that there were many dilapitated national schools which required funds.

Some Twitter users also argued that if New Era University College was eligible for government funding, then all private colleges should be treated the same.