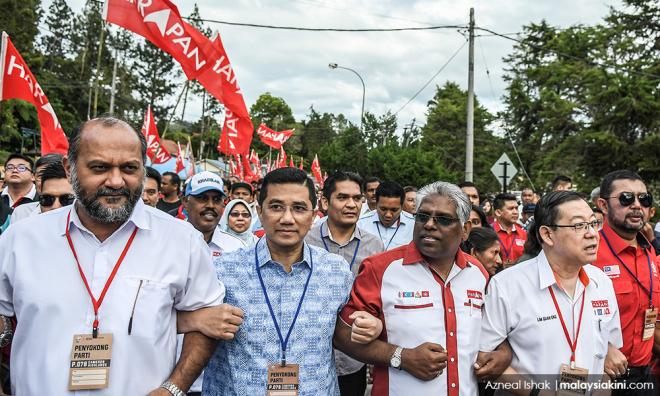 CAMERON POLLS | DAP secretary-general Lim Guan Eng has urged Cameron Highlands voters to choose Pakatan Harapan in the coming by-election so that they do not get left behind in terms of development.

Lim, the finance minister, said that if Harapan fails to bring about changes in the area, then constituents can always vote differently in the 15th general election.

"Although the Malaysian government has changed, the Cameron Highlands (parliamentary) seat has not changed. Why not change this time?

"This is for the sake of development. If not, the development in the area will lag. If there are no changes, then voters can change again in GE15," he told reporters.

He said this after paying a visit to the Felda Sungai Koyan night market to campaign for Harapan candidate M Manogaran.

According to Lim, the BN-led state government cannot be relied upon to bring development to the constituency.

"This is the chance to get what you desire, where the state government can assist the constituency to bring advancement. If BN wins, it's the same old story.

"Harapan's victory will be a breath of fresh air. We hope the rakyat will give one chance to the Harapan federal government."

The Cameron Highlands by-election was called after the Election Court found that corrupt practices had led to the victory of BN's C Sivarraajh in GE14.

The Election Commission has fixed Jan 26 as polling day, with early voting to take place four days prior.

The by-election will see a four-way battle between Manogaran, BN direct candidate Ramli Mohd Nor, and two independents.

Editor's note: Lim has since clarified his remarks, which can be read here.