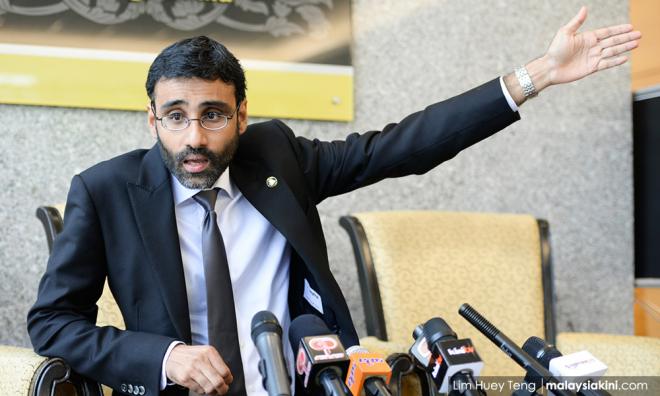 Surendran hits out at 'outrageous' defence of Sedition Act

Lawyers for Liberty advisor Surendran has hit out at "outrageous" defence of the Sedition Act 1948, including the claim by lawyer Abdul Aziz Abdul Rahman who said an attempt to abolish the law without consent from the Conference of Rulers, can in itself be seditious.

Abdul Aziz, who was involved in the amendment draft of the Sedition Act after the 1969 riots, based this on his claim that the law was enacted under Article 10(4) of the Federal Constitution.

Article 10(4) allows Parliament to pass laws prohibiting the questioning of the rulers' position, bumiputera special privileges and national language on grounds of public security and such laws requires involvement from the Conference of Rulers.

However, Surendran said this was impossible has the Sedition Act was enacted during the British colonial era, even before the Federal Constitution existed.

"The constitution only came into existence nine years later in 1957. It is simply astonishing that Abdul Aziz overlooked this simple fact in his zeal to uphold the oppressive Sedition Act.

"Further, if the Sedition Act was really enacted under a specific provision of the constitution such as Article 10(4), this would be reflected in the preamble to the Act.

"However, nowhere in the Sedition Act does it state that it is a law made under Article 10(4)," he said in a statement.

Surendran added that Article 63(4) of the Federal Constitution also categorises the Sedition Act as separate from laws passed under Article 10(4).

"The Sedition Act 1948 is thus, an ordinary legislation which can be repealed by a simple majority in Parliament, and without the consent of the Conference of Rulers.

"Abdul Aziz's (photo) claim that the Sedition Act is an 'extraordinary' piece of legislation does not have either a legal or historical basis. In fact, the Sedition Act is little more than a British penal ordinance carried over into independent Malaysia.

"Far from being an 'extraordinary' law, it is actually an inferior colonial law that was never passed by our Parliament.

"Secondly, it is the height of absurdity for Abdul Aziz to claim that calling for the repeal of the Sedition Act is itself a seditious act," said Surendran.

Surendran said Parliament has the power and duty to repeal or amend a law, therefore, it can never be seditious for citizens to call upon Parliament or the government to abolish any laws, including the Sedition Act.

"It is simply outrageous that Tan Sri Abdul Aziz, Umno and some other right-wing groups continue to defend this repressive relic of British colonial rule which is contrary to the aspirations of independent Malaysia," he said.

"It was one of the pre-Independence administrative ordinances made by the British government called Sedition Ordinance 1948.

"After Independence, in 1969, it was adopted in as law by the Law Revision Committee by virtue of powers conferred under the Revision of Laws Act 1968. It did not go through the parliamentary lawmaking process.

"The distinction between a law passed through parliamentary process and a law adopted by a committee is not one between apple and orange but one between marble and pumpkin," he said in a statement.

Arun said as the Sedition Act was not made by Parliament, it is not entitled to protection as a law made under Article 10(4) of the Federal Constitution.

"Hence, the question of two-third majority support at each House of Parliament and consent of Conference of Rulers, under Article 159, to amend or abolish it does not arise.

"In fact, the Sedition Act, being a law not made by the Parliament under Article 10, has at all times been unconstitutional as it was contrary to the freedom of speech guaranteed by the Article 10.

"Hence, any motion to abolish the Sedition Act cannot be seditious and in fact must be welcome for reasons aforesaid," he said.