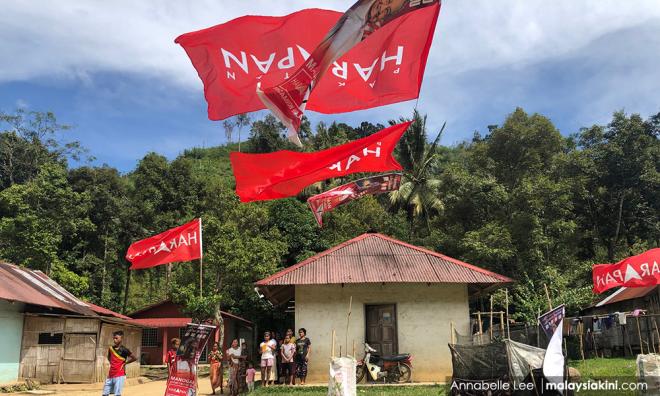 Yoursay: Harapan snatching defeat from the jaws of victory in Cameron

YOURSAY | ‘For sure, BN stands a good chance if you add PAS voters in GE14.’

Anonymous 1689721435778173: Based on the size of the crowd at Umno-PAS ceramah, which numbered over 1,000, and the less than 100 who attended the Pakatan Harapan talk, it is quite obvious which way the Sungai Koyan crowd will vote in the Cameron Highlands by-election.

Lucky thing they are not the only ones to decide for the parliamentary seat. There may well be supporters of Harapan among them, but they dare not show their faces lest they offend their friends and neighbours.

For sure, BN stands a good chance if you add PAS voters at the 14th general election. That was why former prime minister Najib Abdul Razak was there to steal a bit of glory.

But it is not a sure thing. The voters may yet spring a surprise, like in GE14.

Filament Masinga: All well and good that Amanah president Mohamad Sabu defended DAP, as he should as leader of a fellow Harapan component party. But the problem is that Harapan has done its utmost to bungle this by-election, snatching defeat from the jaws of victory.

First was Harapan candidate M Manogaran with his ridiculous “kuih” analogy. It is not so much that the intent behind the statement – to show the level of racism in Cameron Highlands – was necessarily wrong, but his general gurning lack of eloquence made the delivery ham-fisted, which was not helped by his weak apology.

Then Finance Minister Lim Guan Eng waltzed in with a threat that the constituency will be left behind if it doesn’t vote for Harapan, along with other coalition operatives abusing government machinery to campaign in the highlands.

Not to absolve Umno and PAS of their sins of sowing racial discord, but it was known that they were going to do this. What else can they say?

It is Harapan who should be on the front foot now that they have federal power. The onus is on Harapan to portray an image of being whiter than white, not to deny the alleged abuses of power after the fact. Haven’t they heard of optics?

It is almost as if we are dealing with a bunch of incompetents who have never been involved in an election before.

Caring Citizens of Malaysia: Indeed, I don't know how Harapan is going to turn over this mess. Harapan has screwed up multiple times during the campaign, with Umno-style threats and iron fist tactics, which even Umno dare not use.

Keep talking trash and Harapan can even forget the by-election for Rantau later on. Cameron Highlands is Umno’s seat to lose, I don’t see any way that Harapan can win here.

Are PAS and Umno implying the acting Agong met with the 'enemies of Islam?'

Malaysian Malaysian: Precisely. It would be interesting to know what Umno and PAS make of the acting Yang di-Pertuan Agong Sultan Nazrin Shah’s meet with DAP’s Lim Kit Siang and Liew Chin Tong.

The actions of these leaders point to a betrayal of their own religion and party as they collude with the dark forces of Umno to the clear detriment of the people’s interests.

Having been decimated at GE14, the axis is on a suicidal mission to destroy what was won by Harapan and ruin the vision of Malaysia Baru.

These people fight dirty, and will use all the tools at their disposal to destroy what was won.

Anonymous 770241447347646: PAS and Umno have no more ammunition to use against the Harapan administration except race, religion and royalty. They are definitely not interested in defending these three institutions.

If they were, then they would have spoken out against all the financial scandals in the past – especially the Lembaga Tabung Haji debacle, which is very close or connected to these ‘3R’ institutions, and Felda too.

Why the utter silence? They know that if they open their mouths, many more skeletons might come out.

Vgeorgemy: Thayaparan knows the reason behind the claim that DAP “disturbed” Islamic institutions and the monarchy since coming into federal power.

We should discuss the logic behind this claim. It is the unfettered access that DAP has to the hinterlands, which emerged with Harapan coming into power.

It is widely reported that the Najib's much published grand reception in Cameron Highlands is due to the ignorance of Orang Asli settlements to the fact that he now occupies the opposition bench.

The restriction of access to the hinterlands back then created much respect for Umno and PAS in Malay villages.

The meeting between the acting Agong and DAP is changing the political scene. Such a change of attitude towards the major political players is a direct challenge to Umno and PAS’ political theology of hate and intolerance.

With Harapan in Putrajaya, the Malay population will have the opportunity to discourse directly with DAP on policy issues.

Umno and PAS are dead against such direct discourse, but they can't stop the inevitable. The acting Agong started the discourse from the side of the Malay royalty directly with DAP to understand their policies towards Malay institutions and Islam. Let the words fly directly to Malay villages and royal institutions.

Roger 5201: Umno and PAS have taken their brand of supremacist bigotry too far. Sultan Nazrin has clearly demonstrated the palace is above politics, as it should be, and sees DAP as a legitimate government of the people, by the will of God.

DAP is a multiracial party that has been consistently practising democratic principles. It is neither chauvinistic nor anti-Islam.

If Umno Youth chief Asyraf Wajdi Dusuki and PAS Youth chief Muhammad Khalil Abdul Hadi claim otherwise, the burden of proof is on them to prove it.

New Malaysia with Progressive Malays: Najib appears to be a happier man these days. As the dust settles, the former prime minister realises that he might not need to spend time in prison after all, despite his 1MDB corruption and money laundering charges, as well as the discovery of hundreds of millions in cash and jewellery in Pavilion Residences.

There are still truckloads of corrupt officers in every single institution in the country who wish and pray for the return of the crook-in-chief. His supporters must miss the good old days where they could earn extra income through corruption.

Heck, even the coming Cameron Highlands by-election could see the once-corrupt Umno score its first victory since the May 9 polls.

Voters, especially the poverty-stricken Orang Asli community – which makes up over 20 percent of the electorate in the constituency – must really miss the previous BN government giving them free cash during the election.

Existential Turd: PAS and Umno can put all kinds of spin on this meeting between the acting Agong and DAP. They could say the Agong was duped, but that could be misinterpreted as ignorance on the monarch’s part.

The more likely spin is that the acting king was only being superficially being friendly to DAP, but secretly he is trying to lull the party leaders into complacency to reveal their true selves.

In their world, black is white, and white is black. Paedophilia can be sanctioned by child marriage, corruption can be legitimised by uplifting the poor, and mud-slinging, lying, innuendo, hatred and bigotry towards others can be championed by in the name of defending ‘bangsa dan agama’.