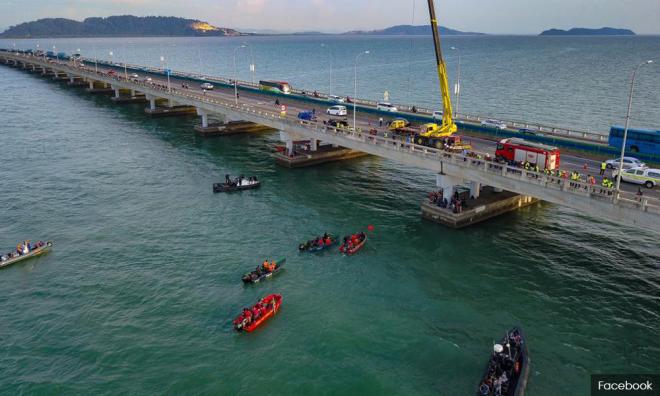 The family of Moey Yun Peng has asked the public to stop sharing pictures of his body on social media.

"We hope the public can stop speculating on the accident and stop sharing the pictures.

"We want to remember him as the handsome and cheerful boy and cherish the nice moments we had with him," a family member was quoted as saying by The Star Online.

Moey was killed after another vehicle hit his SUV on the Penang Bridge, causing him to lose control and plunging into the Penang Strait.

It took search and rescue teams three days to locate and lift the vehicle out of the water due to challenging conditions.

Moey's bloated body was found in the driver seat when the vehicle was lifted out of the water.

The 20-year-old's funeral will take place on Thursday.

Meanwhile, the driver who hit Moey's vehicle has been arrested, according to Sin Chew Daily.

The report said the driver surrendered himself at the Seberang Perai Tengah district police headquarters at 2am today.

Police said the case was being investigated under Section 41 of the Road Transport Act 1987 which concerns causing death by reckless and dangerous driving.

According to a dashcam recording of the incident, the speeding driver had swerved into the slow lane to overtake a vehicle, but lost control.

He then hit Moey's SUV, which also caused the latter's vehicle to lose control and fall off the bridge.