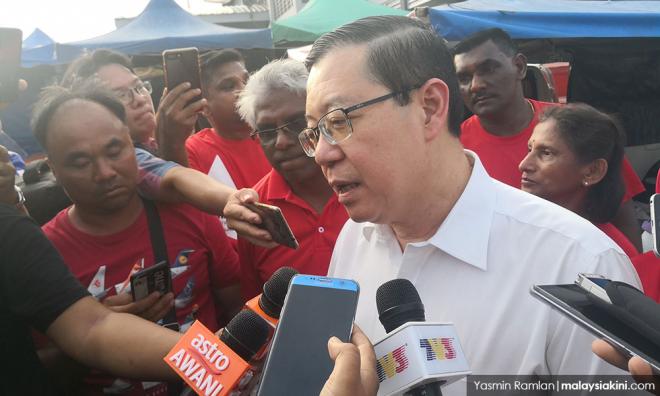 Day 13: Victory for BN will be victory for Najib, says Guan Eng

CAMERON POLLS DAY 13 | The Cameron Highlands by-election is entering its final stages with just one day left before polling.

11.55pm: This concludes our live coverage today of the Cameron Highlands by-election campaign. Follow our live blog again for the final day of campaigning tomorrow.

Echoing a statement from his father Lim Kit Siang, Guan Eng says a victory for BN will be neither a victory for candidate Ramli Mohd Nor nor Umno, but for Najib Abdul Razak.

Kit Siang had said that the former prime minister's prominent presence on the campaign trail was part of a "diabolical and devilish" plot for him to return to power.

The DAP veteran also urged outstation voters to return to cast their ballots on Saturday to put a halt to Najib's comeback plan.

9pm: Jelai - Muhyiddin Yassin says that investigations cannot be carried out into allegations that the tok batin (village chiefs) of several Orang Asli villages were "kidnapped" because no reports have been lodged.

"In this campaign period, anything can happen."

"But if there is no evidence, no basis, and no report made to authorities – police of anyone else – investigations cannot be carried out, so we don't know the real situation," he tells reporters.

Muhyiddin was asked to comment on Pahang PKR chief Fuziah Salleh's allegation that several tok batin were transported away by certain quarters to prevent Harapan from entering their villages.

"Today I heard that several tok batin were 'kidnapped.' When we go to the villages, the tok batin are missing, only the villagers remain.

"Who knows where they were brought, I don't know," she was quoted as saying by Berita Harian.

Lodged by Kampung Keledek Bersatu chief Amini Kashfi Koraini, the report details how he discovered the black and white flyers at 6.50am this morning while at the Sungai Koyan 1 mosque.

At a press conference at Harapan’s operations room, Ketari assemblyperson and Jelai campaign director Young Syefura Othman denounces the use of such “racial provocation” as part of political campaigning, but anticipates it will continue.

“We hope voters won’t be swayed or entertain such provocation,” she says.

The Sungai Koyan area in Jelai is a Malay-majority Felda settlement.

Bersih reminds candidates not to campaign on polling day

3pm: Petaling Jaya - Electoral watchdog Bersih has urged all candidates and political parties which are participating in the Cameron Highlands by-election to refrain from setting up ‘pondok panas’ or conducting campaign activities on polling day.

In a statement, the organisation notes that such activities, especially in areas near polling stations or on social media, are punishable offences under Section 26 of the Election Offences Act 1954.

It further laments that such activities have “continued unabashedly” in the past four by-elections since GE14, despite the legal provisions cited.

“We urge the Election Commission and the law enforcement team to enforce these laws strictly to mark a new beginning of a new election culture in the country,” Bersih says.

While shaking hands with patrons, several BN activists, who referred to Lim as "Uncle Lim," says Pakatan Harapan is fond of empty promises.

Lim, who is accompanying Harapan candidate M Manogaran, ignores the hecklers and walks past them.

The hotel is hosting a large number of out-of-town BN campaigners.

10:30am: Jelai - More than 400 people welcome former prime minister Najib Abdul Razak as he arrives at the Orang Asli settlement of Pos Betau.

He appears from his vehicle in a white T-shirt bearing the now-infamous slogan “Malu Apa Bossku?” and an image of him perched on a motorcycle.

Local leaders crown Najib with a traditional mulang (weaving) headdress and a sash before he walks towards the stage as the crowd chant “Najib! Najib!” and “Hidup BN!”.

Many rush towards the Pekan MP to take selfies and hug him.

Manogaran calls on EC to take action on Adib poster

9.30am: Brinchang - Pakatan Harapan candidate M Manogaran reveals that a poster of him with the title “DAP Hindu bunuh Adib” (DAP Hindu killed Adib) has gone viral on social media.

This refers to firefighter Muhammad Adib Mohd Kassim, who died on Dec 17 last year from injuries sustained during a riot at Seafield's Sri Maha Mariamman Temple.

Manogaran also wants the Election Commission to take action, as he claims that the poster, which was seen in Jelai, violates Section 9 of the Election Offences Act 1954.

Section 9 of the Act concerns the use of undue influence.

He adds that he has not lodged a police report yet, but that he will take action if slander against him still occurs after the by-election.

8.30am: Brinchang - DAP supremo Lim Kit Siang starts his day in the Brinchang wet market by distributing spring couplets to the local community.

Coincidentally, MCA is also here, again, collecting signatures from the public to support the retention of the death penalty.

During the press conference later at Kampung Taman Sedia, Lim Kit Siang responds that MCA should not politicise the issue and this is merely a tactic of MCA to "borrow a corpse to resurrect the soul”.

He says that there is always room for NGOs to discuss the issue, and that Harapan respects all opinions. However, he added, MCA should not use the space to politicise the matter.