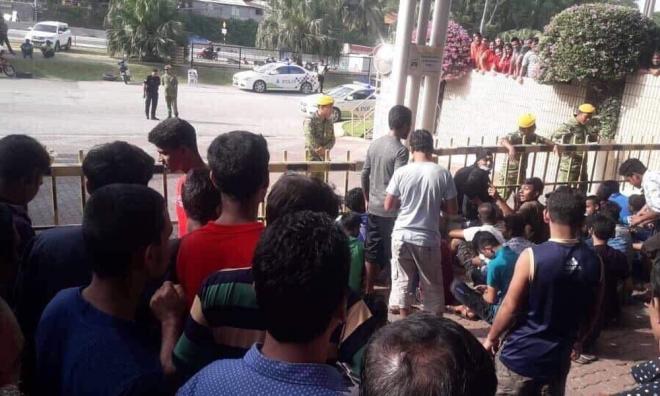 YOURSAY | 'This is not an isolated case of one company running afoul of labour laws and workers' rights.'

Anonymous 1210451484993038: WRP Asia Pacific Sdn Bhd owes every Malaysian, who is embarrassed by this episode, an explanation.

First, are these foreign workers directly employed and paid by WRP? Or are they employed via third-party labour supply companies that invoiced WRP and paid the workers after deducting their take?

A lot of times, these third-party labour suppliers are bloodsuckers who take huge cuts from the sum paid by the employers before passing meagre amounts to the foreign workers.

They suck the foreign workers' blood because they have to grease the whole chain with money - from source country officials and syndicates, embassy staff, to local officials and the well-connected local syndicate that monopolises the issuance of work permits.

I don't know what's the reason for withholding the salaries of the foreign workers, so WRP owes every concerned Malaysian an explanation.

Lodestar: How can this sort of exploitation happen in Malaysia?

Are our labour laws and enforcement so weak that we allow greedy, unconscionable employers to exploit poor foreigners who already make great sacrifices coming here to work for wages that the locals won't touch, and then not paying them to boot?

Steven for Malaysia: The Labour Department should have stepped in when the pay was overdue for one week. I'm sure many of us would feel uneasy if we were not paid by the end of the month.

Anonymous_1527925538: Our human resources minister had better explain to the people why such things can happen in Malaysia, which tarnish our country's image.

Annonnymous 080: Salary not paid for three months? My goodness!

When a foreign labour force is the mainstay of the company, there is a need for local union members, foreign embassy representatives and the Human Resources Ministry to vet the monthly payment of wages and employee grouses.

Malaysia must wean itself from such sources of labour. It does not serve the country well to exploit these workers. Our own workers must be paid equitable wages.

Just Sharing: “All settled”? These poor fellows didn’t get paid for three months. How is this inhumane treatment of foreign employees not criminal?

At least the Human Resources Ministry should take some action on the irresponsible employer.

Kleeo: The federal government must take responsibility. This is no longer an isolated issue of one company running afoul of labour laws and workers’ rights. This is a system-wide abuse of human rights.

Indeed, Malaysia cannot go and crow about Palestine on the global stage while it allows modern-day slavery inside its own borders.

Gerard Lourdesamy: Well done to the Harapan government. Is Umno Youth contending that that DAP has no good Muslims?

DAP has never advocated abolishing the status of Islam as the religion of the federation. As to the constitution, it is a hybrid.

Since Article 4 states that the constitution is the supreme law of the land and not syariah, it is open to argument as to whether the constitution is purely secular or whether it has religious elements by virtue of Articles 3, 11 and the state list.

But that does not detract from the fact that any qualified Muslim, irrespective of the party he belongs to, is entitled to sit on the board of religious bodies.

Hank Marvin: What’s the problem here? Paloh assemblyperson Sheikh Omar Ali has got the qualifications to take up the position.

The Umno Youth chief is making a fuss just because Sheikh Omar is a DAP man. What a joke.

DAP is upholding the constitution, so the allegation that the party does not recognise the position of Islam is complete nonsense.

Kheng: "Yadim should remain as a premier dakwah institution that transcends political parties, with a role to spread understanding of Islam among the people since its formation in 1974."

The Umno Youth chief is confused. He says appointments to Yadim should transcend political parties, but at the same time, he is protesting Sheikh Omar's appointment as he is from DAP.

Hafidz Baharom: Having read the contents from Yadim’s webpage, I’m glad someone from DAP got placed in there. He has a bachelor’s degree majoring in dakwah.

Quigonbond: Look what ulama affiliation to Umno/PAS has got us - a totally corrupt regime.

Perkasa leaders should go home and rethink their lives if they think political affiliation is so much more important compared to actual character and ability.

And let this be a warning to Bersatu - don't add fire to this.

You did that with the protest against the ratification of the United Nations International Convention on the Elimination of All Forms of Racial Discrimination (Icerd), empowering extremist voices and legitimising their false crisis about Malay Muslims being under threat.

Newday: Perkasa - you promote racial and religious rights for Malays non-stop. In this case, we have a well-credentialed Malay Muslim who represents the next generation of young, articulate and open Malays.

So what is your irrational fear built on, Perkasa? A fairy tale that DAP will dismantle Islam and make Malay rights disappear. You know and I know that this cannot happen.

Yet, if this fact becomes known to your supporters, any justification for Perkasa's existence will disappear. You and your ilk will steadily lose control over those who have had the fog of fealty religion placed over them.

I wish Sheikh Omar the best in his endeavours here. May his more liberal form of Islam trickle through this religious fog to create a more open and inclusive Malaysia.