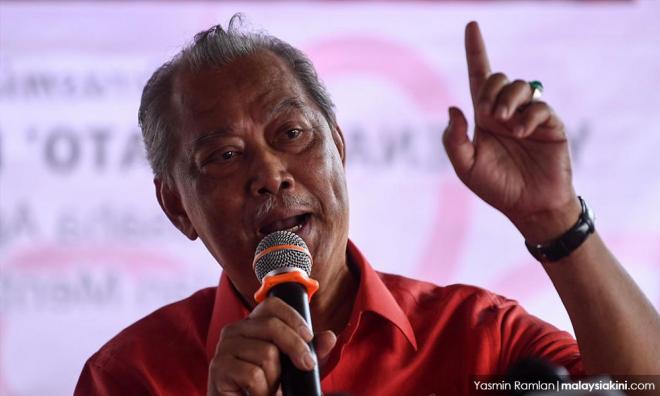 Pakatan Harapan deputy president Muhyiddin Yassin today urged the people, especially voters in Semenyih, to scrutinise PAS’ willingness to cooperate with Umno, which is faced with many problems.

“PAS should know that Umno has committed many transgressions. I was thrown out, sacked from the previous government because I dared to speak up against their transgressions and mistakes.

“I am confused because PAS says it’s struggles are in the name of Islam, it knows transgressions have been committed, (and) that negligence occurred in Tabung Haji, Felda and 1MDB, yet it still wants to be cosy (with Umno). This isn’t Islamic at all,” he told reporters after announcing Muhammad Aiman Zainali as Harapan's candidate for the Semenyih by-election today.

Muhyiddin also questioned the sincerity of the two parties’ cooperation - whether PAS was hitching a ride on Umno or vice-versa.

“I have been in politics a long time. Sometimes this (cooperation) is only for a while, but will PAS and Umno realistically merge as one party? Anyway, that’s their problem,” he said.

He said the cooperation between Harapan’s component parties ​​​​​was different in that they wanted to get Malaysia back on track towards excellence.

Muhyiddin also urged Harapan not to take the Semenyih by-election lightly and to work hard to ensure its candidate wins by a bigger majority.

The Bersatu president said they could expect a stiff challenge in the March 2 by-election due to the cooperation between Umno and PAS.

“From our calculations, the incumbent (late Bakhtiar Mohd Nor) won by more than 8,000 votes. However, when we did a combined simulation of the total votes garnered by Umno and PAS, our majority dropped to about 1,900 only.

“That’s simulation. Nevertheless, whatever cooperation they have is not important. What is important is for us to work hard here,” he

The by-election has been necessitated by the death of Bakhtiar, of Bersatu, of a heart attack on Jan 11.