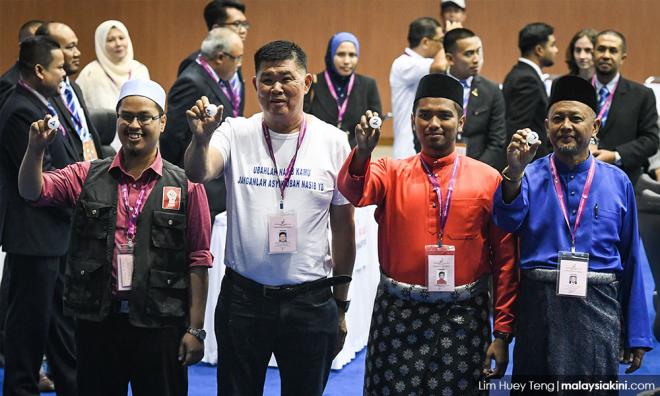 The Semenyih by-election campaign will kick off after the nomination process is completed this morning.

The March 2 contest will determine if Pakatan Harapan can retain the state seat amid claims that Malay support for the ruling coalition is waning.

Harapan is fielding Muhammad Aiman Zailani, 30. He is the son-in-law of the late incumbent Bakhtiar Mohd Nor.

Both candidates are locals.

PSM's Nik Aziz Afiq Abdul and social activist Kuan Chee Heng are also expected to vie for the semi-urban Malay-majority seat in Selangor, which had been an Umno stronghold since 1959 until the last general election.

11am: Dewan Seri Cempaka - Election Commission chairperson Azhar Azizan Harun says that the nomination process for the Semenyih by-election is the fastest in the nation's history.

Azhar tells a press conference that the EC wrapped up the process by 10.25am.

He also notes that integrity pledges (surat aku janji) asking candidates to adhere to election laws were prepared for all four contenders.

The EC, Azhar adds, is aiming for a 70 percent turnout, and expects to announce the results by 10pm on the March 2 polling day.

10.25am: Dewan Seri Cempaka - The battle for the Semenyih state seat will be a four-cornered fight.

The EC will announce the candidates later.

9.00am: Dewan Seri Cempaka - Harapan candidate Aiman Zainali is confident of retaining the seat which fell vacant following the death of his father-in-law Bakhtiar Mohd Nor.

"I am happy with the support given to us. We are confident that we can defend the seat," he tells the media.

Aiman is also hoping to bag a bigger majority than his late father-in-law, who ended Umno's dominance of the seat in the last general election.

9.00am: Dewan Seri Cempaka - Social activist Kuan Chee Heng arrives with a group of 10 supporters. He is the first independent candidate to enter the venue to file his nomination papers.

Previously, the EC said 13 nomination papers were sold with regard to the March 2 contest.

8.40am: Persiaran Impian Perdana - Some 20 PAS representatives arrive at the BN camp and are greeted with handshakes and hugs.

There are more than 1,000 supporters in the area.

After reciting prayers, the group moves towards Dewan Seri Cempaka, which is the nomination centre.

8.35am: Persiaran Impian Perdana - Harapan leaders and some 500 supporters recite a short prayer before marching to the nomination centre, Dewan Sri Cempaka, with their candidate.

Armed with Harapan flags and placards with the image of the candidate, the group, which is led by Muhyiddin, also chant 'Allahuakbar' (God is great) as they march.

Bersatu member Mustapa Mohamed, who is also the MP for Jeli, and Bagan Serai MP Dr Noor Azmi Ghazali are also present to lend their support.

8.15am: Persiaran Impian Perdana - Some 50 PSM members and supporters gather in front of a shop lot near the nomination centre.

Wearing a red shirt, which is the colour of the socialist party, and a white songkok, candidate Nik Aziz Afiq Abdul arrives with his family.

7.40am: Persiaran Impian Perdana - Clad in a blue Baju Melayu, BN candidate Zakaria Hanafi arrives in a four-wheel drive at a carpark located behind the Dewan Seri Cempaka, which is the gathering point for the coalition.

He is greeted by some 30 supporters and poses for selfies with them.

7.30am: Persiaran Impian Perdana - Harapan candidate Muhammad Aiman Zainali and the coalition's leader gather at the carpark next to a golf course to have breakfast and snap selfies.