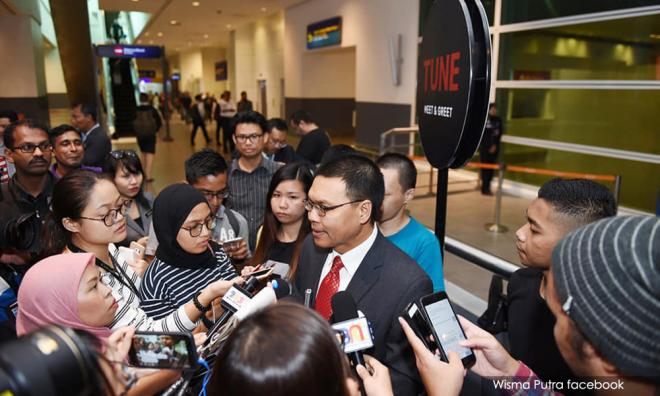 According to Shahrul, Malaysians offered overseas jobs are advised to check with the country’s Malaysian embassy before accepting any offer, to avoid falling victim of fraud.

He said this to reporters when welcoming back 47 Malaysians who were released from Banteay Meanchey Provincial Prison in Cambodia, last Friday, after being detained since Dec 11 last year, on charges of cheating, initiating and carrying out illegal online gambling activities.

The 40 Sarawakians and three Sabahans arrived at the Kuching International Airport VIP Terminal at 2.20pm yesterday.

Sending them off at the airport were NGO Antarabangsa chairperson Mustapha Ahmad Marican, and Minister in the Cambodian Prime Minister’s Office Oknha Datuk Othsman Hassan.

Tears of joy awaited the former detainees as they disembarked from the JC International Airlines aircraft and being greeted by their loved ones who had been waiting since 1pm.

Meanwhile, Fatimah said the release of all detainees had received a court order in the country.

She said throughout the negotiations with the Cambodian government, the main thing they were being mindful of, apart from the release of the detainees, was to respect the law of the country.

“I would like to thank the Cambodian government under the leadership of Prime Minister Hun Sen that facilitated us with the release of all Malaysians involved,” she said in a press conference after arriving at KIA.

Fatimah said the key to the success of the release of the detainees from the Banteay Meanchey Provincial Prison, was the concern shown by the Sarawak and the federal governments, working together until positive results were achieved.

“The Cambodian government was considering the release of the Malaysians and made the process easier after seeing efforts by the Sarawak government and its ministers, as well as Wan Junaidi, apart from the cooperation from the Wisma Putra,” she said.

The decision to approve the release of 47 Malaysians detained at the Banteay Meanchey Provincial Prison was made by Cambodian Prime Minister Hun Sen, after finding all the detainees had been duped by a human trafficking syndicate.

Meanwhile, three former detainees from Selangor and one from Kuala Lumpur arrived at KLIA2 this morning.