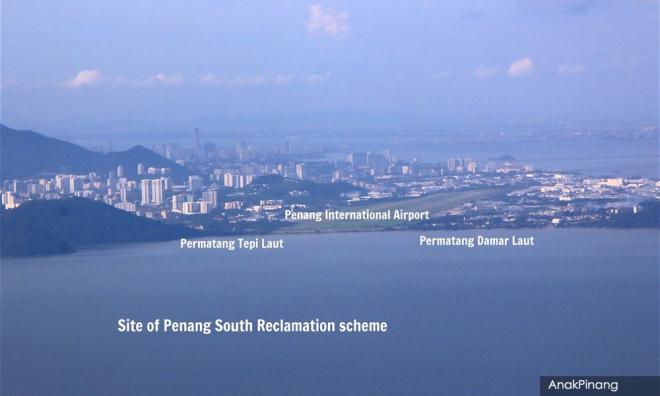 Penang island reclamation plan to be presented in April

Jagdeep said that the plan had not even tabled at the MPFN, previously chaired by former premier Najib Razak, although the state had complied with all the necessary requirements and fulfilled the various studies for the project.

"At the meetings which I attended on behalf of the chief minister, I saw how other states had their reclamation projects approved, with the condition that they submit the required reports," Jagdeep told participants who attended the Penang 2030 Seminar on the Social Impact Assessment Manual in Bayan Baru today.

"It is not a new plan but last time the federal government was not in the same family," he quipped.

The PSR project was proposed as a means to fund the Penang Public Transport Master Plan project, which comprises a 6.5km deep sea tunnel, three highways and the Penang Sky Cab.

Jagdeep said the PSR plan is ready for approval as the only matter pending is the fisheries impact assessment report.

As for the social impact assessment report on the PSR project, the documentation is almost ready, claimed Jagdeep.

Prime Minister Dr Mahathir Mohamed had also been notified about the matter, he added.

Meanwhile, at a press conference, PLANMalaysia director-general Rokibah Abdul Latif said the PSR will be considered once the state completes its 2030 Penang Structure Plan (PSP).

It is learnt that the 2030 PSP is already in its final stages, pending one more public consultation which will be held next month before the state wraps up the matter.

Jagdeep said once the PSP is ready, it will be submitted to the State Planning Committee (SPC) for endorsement.

He said that the federal government would be notified of the project’s status so that the reclamation project could be approved even without the endorsement of the SPC.

Meanwhile, at the same press conference, Chief Minister Chow Kon Yeow said that the local community may lose opportunities to give their views or appeal against a project if there is a structure or local plan already in place.

Chow said the right to appeal may be taken away unless the local plan is closely scrutinised before it is finalised.

"It will not be in the interest of the people if this right is removed, even when there is a local plan in place," said Chow, who was then responding to a question on whether the Appeals Board was necessary if a local plan is already implemented in Penang.

The Appeals Board is convened whenever there are disputes involving neighbouring residents over projects approved by the state.