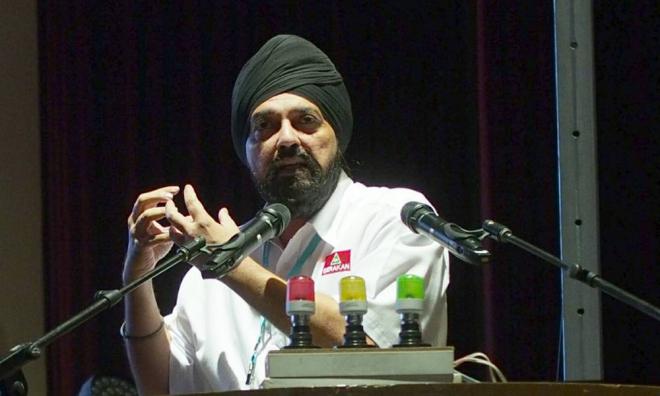 Former BN component party Gerakan has admonished the coalition's secretary-general Nazri Aziz for "racist" remarks made while campaigning for the Semenyih by-election.

Gerakan vice-president Baljit Singh said Nazri has obliterated every effort by BN in the past, to forge national unity among Malaysians.

"Nazri's remarks are backdated, racist, and shows that he has lost the plot, as Malaysians want a multiracial Malaysia and not one that is divided by race or religion," he told Malaysiakini.

"I would accept if Nazri questions the capability or efficiency, or even the ethics and integrity of the three appointees, but don't judge them based on their skin colour!" he added.

Baljit was responding to Nazri in Semenyih on Saturday night questioning the appointment of non-Muslims as the attorney-general, chief justice and finance minister. He added that this meant they were not able to be sworn in using the Quran.

Nazri also warned non-Malays not to question Malay special privileges, pointing out the former also have their vernacular schools to preserve.

Baljit said such remarks were "disgusting", particularly from a former minister, who had dealt with many races, ethnicities and nationalities, during his time in government.

"Is this a new Standard Operating Procedure for BN? Is he still trying to play yesteryear politics which true Malaysians have rejected?" Baljit asked.

"Chinese education is protected by the constitution. Nazri should not request to close down Chinese schools," Oh said in a statement.

He also pointed out that although the posts of AG, CJ, and finance minister were taken up by non-Malays, the current privileges of the Malays were not diminished.