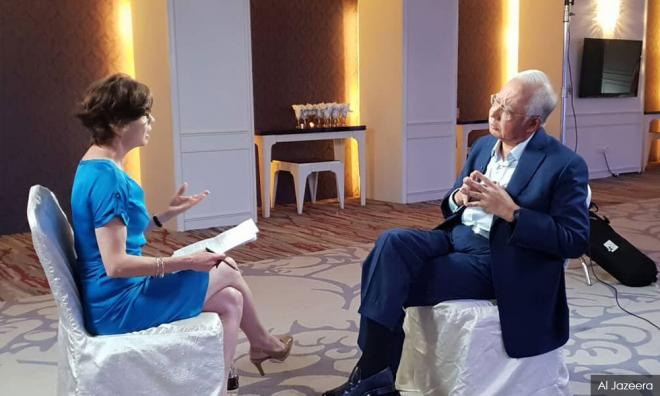 On its website, the RTS judges said the interview stood out for its "courage, tenacity and sheer unadulterated watchability".

"Although the story focused on an issue few would have known about prior to the interview, this did not detract from the viewer’s ability to understand the jaw-dropping venality of the interviewee," they added.

Najib had walked out of the interview after Al Jazeera's Mary Ann Jolley pressed him on various allegations, ranging from 1MDB and the pink diamond for his wife Rosmah Mansor to the murders of Mongolian national Altantuyaa Shaaribu, AmBank founder Hussain Najadi and deputy public prosecutor Kevin Morais.

A visibly irritated Najib eventually asked Jolley to move on to questions about the economy, but when she did not, Najib stood up and threatened to walk out.

"Can we go to the economy? We have spent too much time, otherwise, I'm going to walk out – no more, no more, please no more.

When Jolley insisted on continuing, Najib, who was standing, raised his voice and lashed out at her.

"Come on, you are not being fair to me... Look, I've done my part and I'm not going to stand anymore for this," he said.

He eventually sat down again to speak to Jolley, but walked out of the interview shortly after when he was grilled about fugitive businessperson Jho Low.

Najib later apologised for losing his cool, and promised to accept any request from Al Jazeera for another interview.