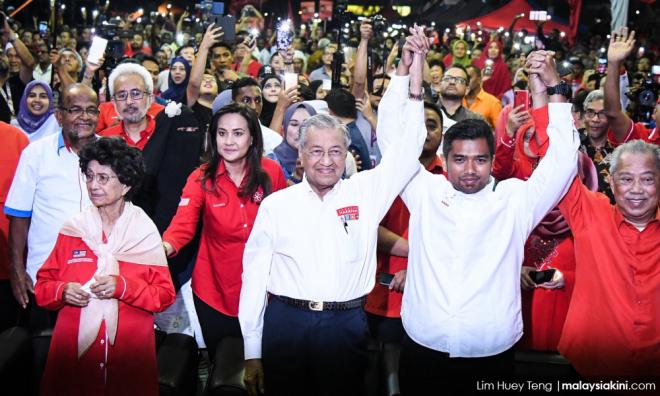 YOURSAY | ‘Some voters will either cast protest votes to prove a point or not vote at all.’

Three reasons why Semenyih voters should choose Harapan on March 2

Clever Voter: DAP veteran Lim Kit Siang, there are also three reasons why voters may turn away from Pakatan Harapan.

One, there are just too many blunders from fake qualifications to rising costs of living, in which the new government is being perceived to be ineffective.

Second, the (former premier) Najib Abdul Razak factor is not a significant factor to be brought up in this local election (Semenyih).

Thirdly, promises of structural change and reforms are too slow, and there may be some voters who will see these as negative. They will either cast protest votes to prove a point or not vote at all.

Just Sharing: Semenyih voters only need one reason not to vote for Harapan - to teach them a lesson not to take the people for granted.

Harapan is scared of Malay sensitivities; therefore, the Unified Examination Certificate (UEC) is still not recognised.

Many are being charged but not one case is heard. Where are police, immigration and MACC reforms? Why appoint a senior police officer who punched (prime minister-in-waiting) Anwar Ibrahim (and was convicted) to act as a peace facilitator for Malaysia?

Reforms cannot be done without two-thirds majority in Parliament? Frogs still jump when so many coalition partners and opposition detest such practices.

It’s better for Bersatu to lose this Semenyih state seat so politicking can be minimised.

Palmyra: Remember that 22 of those 60 years of BN’s rule was under the present prime minister. That is 36.7 percent of the previous regime.

Let’s hope Mahathir will not revert to ways that were prevalent during those 22 years.

By the look of things, he is a somewhat changed man. Otherwise, how could he work alongside his former political foes like Kit Siang, Amanah president Mohamad Sabu and the rest of the former opposition leaders. Let them now govern.

Malaysian: Sixty-eight percent of the Semenyih voters are Malays. Kit Siang, you are preaching to the converted, the non-Malays.

Now go ask any Malay why they voted for Harapan in GE14. They did not vote Harapan for a Chinese finance minister, an Indian attorney-general or a Kadazan chief justice.

Under Mahathir's Harapan, the Malays believed they would not lose anything but have other things to gain. But the Malays now feel cheated and rightly so.

Kit Siang, you have been in Malaysian politics since the bloody May 13, 1969 riots. So, of all people, you should know the Malay sentiment, the Malay heart.

1. We should have maintained the status quo and worked for policy changes rather than personnel (ministerial) changes.

2. Give something back to the Malays when asking for something for non-Malays. For example, get all the rich Chinese “towkays” to donate RM300 million to a Malay entrepreneurial/educational fund, etc.

3. Come up with a better bumiputera blueprint, rather than talking more about a Malaysian blueprint.

In the absence of a true Malay leader, Najib has tapped the Malay sentiment and provided a focal point for that feeling.

Najib has gradually worked on this and he may now turn it into a Malay tsunami that will make him the eighth PM of Malaysia. And that will be your, DAP's and arrogant Finance Minister Lim Guan Eng's fault.

Najib has his flaws, but many of the accusations against him are also false propaganda. And by nature, Najib is a good person at heart. The Malays are realising that now.

Harapan will lose Semenyih, Rantau and eventually GE15 because the Chinese leadership failed to understand the Malays and did not know how to get what they wanted by working with the Malays deeply and closely, and wait for results in the long term - not short term.

Not Convinced: @Malaysian, you do have a few good points. But you lost me when you said, “And by nature, Najib has a good heart.”

Not when, he amassed so much wealth on the back of the Malaysian people.

Chuen Tick: Former law minister Nazri Abdul Aziz spoke in public - why are you afraid to name him for the racist extremist that he is, Kit Siang?

Attorney-general Tommy Thomas has better get his act together - yes, we do want the rule of law but please, don't make mistakes that Najib's lawyer can capitalise on to delay his trial.

Don't tell us about those reforms that take more than one electoral cycle to accomplish. What about repealing the Sedition Act? Recognising the UEC? Ratifying the International Convention on the Elimination of All Forms of Racial Discrimination (Icerd)?

I am glad I am not a registered voter in Semenyih, for despite having been one rooting for change for many a year, I cannot in all good conscience give you my vote.

That said, I wish you folks well, and that enough voters in Semenyih still trust Harapan.

Anonymous_1544694118: @Chuen Tick, if you, by your real name a Chinese, cannot give Kit Siang your vote, why should the Malay majority vote for Harapan?

Such entitlement you want - UEC, Icerd - but you cannot wait a while? Rather, you want to let Umno or PAS win? Will they recognise UEC? They don’t want a non-Malay to be AG or chief justice for even two years.

Look at the bigger picture. Which is the better of two evils? Hopefully, when Umno-PAS comes into power in GE15, you will wake up.

ChuenTick: @Anonymous_1544694118, yes, it is my name and I am a Chinese Malaysian. It is not my concern if the Malay majority does not vote for Harapan in Semenyih.

If Bersatu, despite its obvious racist slants, cannot get their votes, it can only mean they are not getting things right.

Can I not wait for the reforms? Of course, I can - for those policies need time to be implemented.

But when Harapan does not implement the changes already promised that are within its power, can they blame us for calling them out?

No, Umno-PAS will not recognise UEC or ratify Icerd but you don’t get the point - they never did promise to do so. That is a crucial difference.