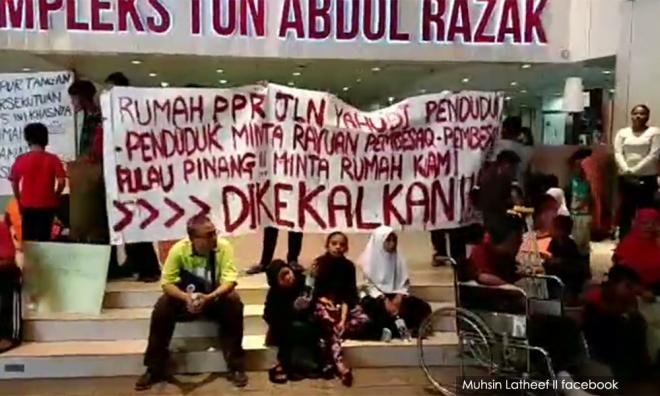 A group of residents from Taman Manggis people’s housing project (PPR), who were recently ordered to vacate their units, tried to stop the prime minister’s political secretary Abu Bakar Yahya from leaving Komtar, where they had their meeting, and demanding an immediate solution to the problem.

Abu Bakar had to wait in his car for almost 20 minutes as the residents blocked his car before several police officers came and dispersed the crowd to allow Abu Bakar to leave.

Penang Bersatu Youth chief Shameer Sulaiman was also ambushed by the residents who were unhappy with his explanation regarding the issue.

Abu Bakar arrived at the Komtar building at 7pm to meet with the residents, as instructed by the prime minister who wanted more information on the alleged eviction of residents from Taman Manggis PPR and the Tanah Wakaf Abdul Cauder, Jalan Mengkuang in Butterworth.

To reporters, Abu Bakar (photo) said he had obtained feedback from the State Housing Department and was told that the department was prepared to help the residents according to the existing rules and regulations.

“I will also prepare a report for Tun Dr Mahathir,” he said, while calling on all quarters not to fall for unverified stories about the eviction.

Yesterday, Chief Minister Chow Kon Yeow told a press conference that the Taman Manggis PPR units were rented out based on a set of conditions, which the tenants had violated.

He had said that the PPR concept was based on a five-year rental, during which the tenant was expected to improve their income so that they would be able to afford the rental of other housing units or maybe even buy their own housing units.