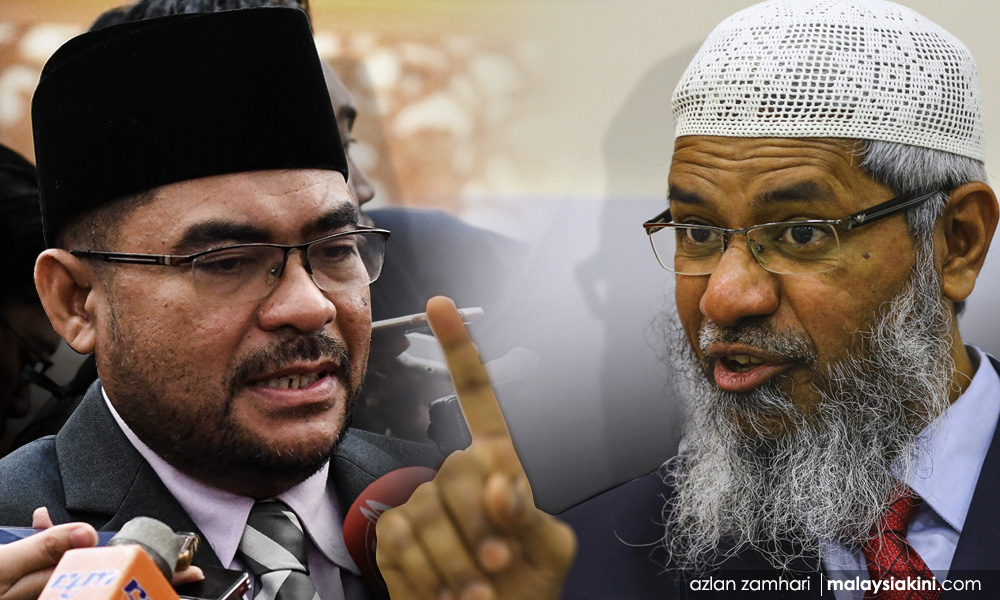 Yoursay: No double standards, go after Zakir Naik too

YOURSAY | 'He takes great pleasure in running down other religions to the delight of his Muslim audiences.'

David Dass: Only morons and extremely foolish individuals would insult Islam or the prophet or any religion knowing what the consequences could be. The current crackdown should serve as a warning to all.

While it is okay for Minister in the Prime Minister's Department Mujahid Yusof Rawa to speak so firmly about people who insult Islam, he should be equally firm about those who insult other religions.

Nothing that has happened so far can equal using a cow’s head as football as a deliberate provocation of the Hindus and the desecration of the consecrated host sacred to Catholics by two Malay journalists.

No major action was taken against any of them. And then, there is preacher Zakir Naik who takes great pleasure in running down other religions to the delight of his Muslim audiences.

All should respect all religions. No one should show disrespect to other religions. That said, a line should be drawn on intellectual discussions involving interpretations of holy books that could adversely impact the rights of non-believers.

Not Convinced: If we are to take action against those who are sowing religious hatred, then at least make sure that there are no double standards.

Apart from Zakir Naik, the authorities should have taken action against Perkasa chief Ibrahim Ali.

Instead, he was left off the hook for his ‘burn bibles’ call in 2014 because, according to the then BN government, “he was only defending the sanctity of Islam”.

FairMind: Indeed, insults against Islam and the prophet are clearly not acceptable, just like insults on other religions.

Surely, insults against PAS interpretation of “syariah-compliant” lies and legitimacy of Umno’s kleptocracy because it is for unifying the Muslims for the sake of personal enrichment of the leaders of PAS and Umno have their justification.

They themselves have made the non-Muslims misunderstand the true and good teachings of the prophet and Islam.

Shouldn't the first task of Mujahid and the police be to catch those people who have conveyed the falsehood in the teachings of Islam that result in the misunderstanding of a good religion?

Honestly, other faiths don't understand why a bad thing such as lying and stealing in their own faiths are considered permissible in another religion.

They can't understand how turbaned and five-times-a-day mosque-going PAS/Umno leaders can amass immense, unexplained wealth and own expensive cars and properties that ordinary Malaysians cannot even dream of and yet tell their followers their lies are sanctioned by God and that people of other faiths have stolen their wealth.

People want to know how a pious and top religious leader can gloat over how he is being clever to receive monies belonging to the sweat and tears of the rakyat, lie about it and go around across the country promoting the giver as his “bossku”.

The first priority is to educate and explain to the people of other faiths, instead of catching them when they are misled by the very persons who should be upholding the good teaching of Islam.

People are frustrated. They want to ask these questions but they are not good in putting it in words and hence have written in a way that appears to have insulted Islam and the prophet.

Many educated Malays would also like to know the answers to these questions, too.

The Wakandan: This (monitoring religious insults) is a dangerous move. We do not need the secret police in Malaysia to breath down our necks monitoring what we do.

This is against human rights and our freedom of expression. We already have all those repressive laws, we do not need to add any more to them.

Besides, there is no clear boundary on what constitutes an insult. It can be abused to victimise people that they do not like.

All in all, a repressive measure. The people do not deserve this.

Anonymous 673761437718749: We voted for Harapan so that we can build a New Malaysia which is fair to all, regardless of skin colour, race and religious belief.

Insulting other religions and races should be monitored and not only for Islam alone.

Kural: Insulting another’s religion is obviously provocative. Seeking clarification on faith-based principles and any possible misrepresentations ought to be distinguished from insulting. Espousing religious prerogatives indiscriminately should be proscribed.

Needless to say, a number of prominent faith-based civilisations have for centuries confronted the ‘reformation’ passion of ordinary adherents to unfavourable facets of institutionalised religion and it seems this accommodation, even when accorded grudgingly, has resulted in improved human development and social progress.

Kader: We need a (Racial and Religious) Harmony Act. The play on anybody’s race or religion for any reason whatsoever should be severely dealt with.

Now with the “marriage” of PAS and Umno, the play on race and religion, especially baiting the non-Malays/non-Muslims into difficult situations will become the norm.

Desperate people will resort to anything, even to the extent of destabilising the country. Laws must be put in place to stop this on the onset. There must be a clear separation of religion and race in politics.

Anonymous_3af6378a: We should have a special unit formed to monitor politicians and (so-called) religious leaders who insult our intelligence. Round them up and kick them out.

yoursay
islam
insults
Related Reports
Umno: Kit Siang should use '10-year jail' to educate DAP supporters
a year ago
Insulting Islam: Lawyer shocked over 10-year jailing of FB user
a year ago
S'gor sultan disappointed over insults against Prophet, Islam
a year ago
Insults and the 'new Malaysia'
a year ago