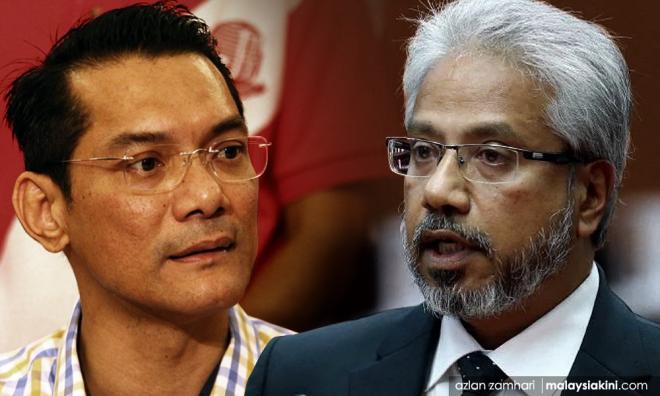 Minister in the Prime Minister’s Department (National Unity and Social Well-being) P Waytha Moorthy (above, right) has filed a suit against Jaringan Melayu Malaysia (JMM) president Azwanddin Hamzah over a racial slur allegedly made by him during an assembly organised by Gerakan Rakyat Malaysia (Geras) at Dataran Seni Klang in December last year.

She told this to reporters after the case management before deputy registrar Nurul Ain Hamzah. Azwanddin was represented by lawyer Sarah Abishegam.

In the statement of claim, Waytha Moorthy, 53, claimed that Azwanddin, 46, had used defamatory words against him in a speech at the assembly organised by Geras on Dec 25 last year and the words were republished by print media and on the Internet.

Waytha Moorthy claimed the alleged defamatory words, which he said were untrue, derogatory, malicious, uncalled for, mala fide, bereft of any truth, reckless, deliberate and premeditated, were downloaded on Azwanddin's Facebook page and had received 187,912 views; 4,705 like; 943 share and 362 comments as on Feb 8, 2019.

He said the alleged defamatory words had caused him harm and embarrassment and were seriously prejudicial to his reputation, and as a result, his good name was tarnished.

He is seeking an injunction to prevent Azwanddin, or his agents, from repeating the alleged defamatory words, as well as general, exemplary and aggravated damages, cost and other relief which the court deemed fit.