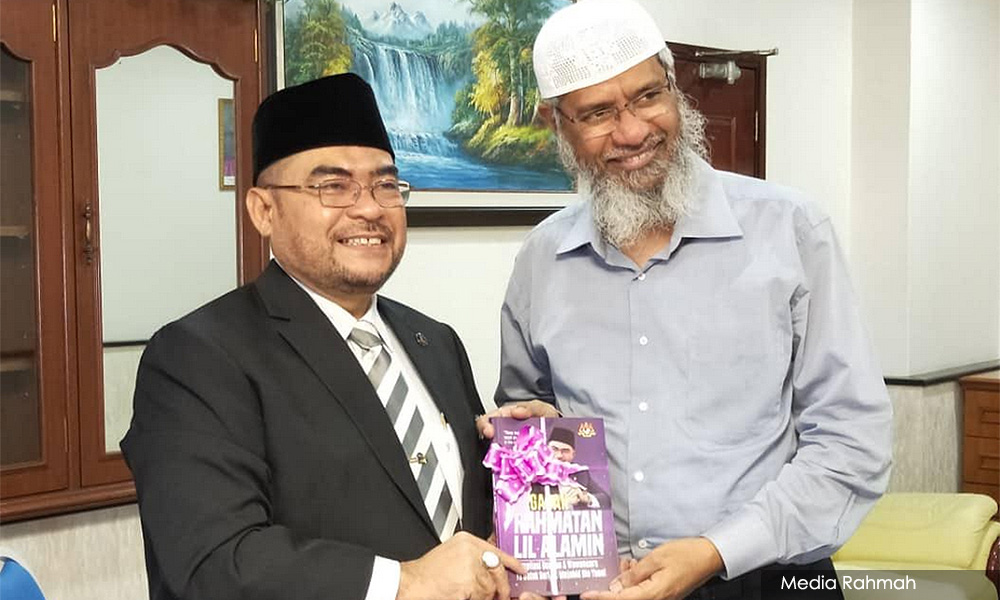 YOURSAY | ‘They revert to the old ways. The feelings of non-Muslims do not count.’

Proarte: So there we have it, Minister in the Prime Minister’s Department Mujahid Yusof Rawa finds Zakir Naik “inspirational” – the preacher who, just before the last general election, said that is was incumbent on Muslims to vote for a Muslim leader who is corrupt over a non-Muslim leader who is upright.

By posting that photo of the preacher on the run from India on his Facebook page, Mujahid has destroyed his credibility in one fell swoop.

Zakir should stop lying about his lectures not being insulting to non-Muslims, because if this is the case, why do non-Muslims who watch his videos despise him so much?

Mujahid must explain why he chooses to endorse and lovingly embrace a 'wanted man' who is such a divisive character in Malaysia.

If Mujahid is a minister worth his salt, he should have known that the Bangladesh government has banned Zakir from entering the country to preach because they considered him a security threat.

He is accused of “inspiring” two of the seven young Bangladeshis who committed one of the most evil and brutal mass killings in modern times in Dhaka in 2016. His Peace TV channel has also been banned in Bangladesh.

Why is the de facto Islamic affairs minister thumbing his nose at non-Muslims in Malaysia rubbing shoulders which such a notorious fugitive? What role can Mujahid now play in bringing communities together given his provocative actions?

Zakir has a history of poking fun and ridiculing other religions when engaging with his audiences. Needless to say, it is useless to make a police report against him, as he is amply protected and adored here.

Albert Ponniah: It is very unfortunate that Mujahid has unnecessarily embarked on this offensive foray, knowing very well some Malaysians are hurt by Zakir’s speeches belittling Hinduism, Buddhism and Christianity.

My feeling is that Mujahid has an ulterior motive. He likely realises he lost his anticipated Islamic dominant personality being the minister in charge, especially after the furore over the ratification of the International Convention on the Elimination of All Forms of Racial Discrimination (Icerd).

He is using whatever means to impress that he has a hardcore Islamic stand. It is people like him who will ostracise a section of Harapan supporters – the Malaysians who are very disenchanted with the fugitive Zakir contributing a divisive situation in the country.

This happens when individuals want to keep or recover popularity, putting self-interest before unity.

NotAnonymous: @Albert Ponniah, the “some Malaysians” you speak of are not a big number, percentage-wise. In four years, that “some” will be an even smaller percentage.

You should realise by now this situation is here to stay. If Mujahid didn’t do this, the next government would. It’s just a matter of time.

Mujahid must feel that he is going lose in the next election. He won by a whisker due to the split votes between Umno and PAS. So he has nothing to lose, nothing at all.

At least, he can do what he thinks is right. Regardless of what the "some" think.

David Dass: They revert to the old ways. The feelings of non-Muslims do not count. Harapan is just worried about pandering to the feelings of extremists.

Bring converts to your faith by your example. Lead an exemplary life and cause others to be inspired by you. Ridiculing the beliefs of another as a way to win converts cannot be a good thing.

Ravinder: Mujahid is a very big disappointment, I thought he was more enlightened than this.

Has he heard Zakir’s lectures on ‘comparative religions?’ So Mujahid fully agrees and supports what Zakir is saying about other religions being fake? Did Prophet Muhammad sanction the belittling of others' faiths in doing dakwah (preaching)?

Are we to understand that the Harapan government is all for the Islamist agenda of extremists? Zakir is sowing the seeds of enmity between Muslims and non-Muslims, and yet he is revered as a great man by the government.

Of course, he is not organising anti non-Muslim activities, but the poisoning of the minds is worse than that. He is intelligent and very subtle the way he is sowing the seeds of future discord between Muslims and non-Muslims.

It's really surprising that our ministers cannot read him properly for what he is.

Vijay47: Statistics, logic, and syllogism have never been my strong suits (not that I have strong suits elsewhere).

But meri dost (my friend) Zakir, Islamic scholar, master of comparative religion, font of philosophy, and general entertainer extraordinaire has been a source of much confusion, mystery, and frequent doses of amusement.

Let me reduce my bewilderment to a simple roadmap. The last time I counted, India had a population of 1,368,737,513. Slightly more if I include Zakir himself.

Of this number, 79.8 percent is made up of Hindus, 15 percent Muslims, 2.3 percent Christians and the rest of other faiths.

On the other hand, Malaysia has 29.7 million people, of which about 18.2 million are Muslim (61 percent). It is clear that going by Zakir’s spiritual measure, 85 percent of India is destined to languish in hell when they finally say “Goodbye, cruel world.”

That being the case, dear friend, why are you not in India, bringing salvation to close to 1.162 billion lost souls? Shouldn’t your responsibilities as a devout Muslim preacher compel you to remain where, as the Bible says, the harvest is plentiful?

Why come to Malaysia with its potential catch a pitiful 11 million (39 percent)? I will hazard to guess that you had to flee from Dharavi, Borivali, Dadar, and Bandra because your religious antics there had made you a wanted man being a threat to your motherland.

Thus a somewhat extended stay in Delhi’s Tihar jail was not quite appealing. So you come to Malaysia, spout a few holy quotations and the whole bunch of local morons are in awe of this outlaw-cum-divine messenger.

So much so that they grant you permanent residence status and two islands to boot. Heck, some are even inspired by you. Malaysia truly heaven!

Teh Tarik: Someone insults a religion in Sarawak and is sentenced to 10 years’ jail. Another insults non-Muslims and is not only given permanent resident status in Malaysia, but is even embraced by a Harapan minister.

It looks like Harapan is even worse than BN when it comes to selective discrimination.

After this debacle, I hope Harapan loses Rantau. Non-Muslims should boycott the by-election to send a message to the disrespectful Harapan confidence tricksters, who in many ways are worse than the previous BN government.

Anon: There goes my vote in the 15th general election. Goodbye, Harapan. I will still cherish that fleeting, temporary euphoria in GE14.

Diabolocracy: One step forward, two steps back – this is the New Malaysia.