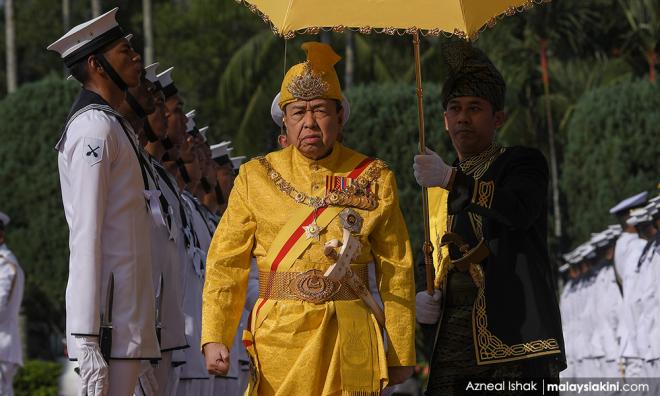 The Sultan of Selangor, Sultan Sharafuddin Idris Shah, today decreed that the state government must come down hard on those who release effluents into rivers.

He said he has been informed that four or five rivers in Selangor are polluted by solid and toxic waste.

“If necessary, laws must be formulated to impose stiffer penalties on those who pollute the rivers in Selangor.

“Besides, the people must also be educated through awareness campaigns on the need to maintain the cleanliness of rivers which are a source of water in Selangor," he said.

The sultan was addressing the opening of the first meeting of the second session of the 14th Selangor legislative assembly at Bangunan Dewan Negeri Selangor in Shah Alam.

Sultan Sharafuddin’s decree comes in the wake of the pollution of Sungai Kim Kim in Pasir Gudang, Johor, that released toxic fumes into the air and sent about 1,000 people to hospital, forced the closure of all the 111 schools there and necessitated a massive clean-up of the river.

The sultan also wants water catchments and forest reserves in Selangor to be well maintained and preserved to ensure adequate water resources in the state for the future.

He said the state government must ensure there is no logging in the forest reserves and water catchments, besides extending the tree-planting programme to preserve the green environment.

The sultan lamented that domestic water consumption in Selangor is at a much higher level than the national rate and said that lowering it can help save clean water and ensure uninterrupted supply.

“Hence, besides improving the management of water supply services, the state government must also work with agencies such as the Lembaga Urus Air Selangor (LUAS) and Pengurusan Air Selangor (PUAS) Sdn Bhd to educate the people on the need to appreciate water and not use it arbitrarily and wastefully,” he said.

Sultan Sharafuddin said he was pleased that the state government has taken proactive, strategic and planned action by having the Selangor State Water Resources Master Plan that can ensure the sustainability of water supply up to 2065.

On tahfiz (religious) education in Selangor, the sultan said the state had 15,000 students in 263 tahfiz private schools registered with the Selangor Islamic Religious Department (JAIS).

He said tahfiz private schools not registered with JAIS and which do not have modern academic education and co-curricular system should be closed.

The sultan also advised the people to safeguard and preserve unity and harmony to ensure the stability and well-being of Selangor.

“My people must always have respect for one another and not play up matters that touch on the sensitivities of any religion, race, community or ethnic group that can undermine harmony.

“Use the technological advancement of today for positive things that can contribute to community solidarity and not spread lies and fake news that insult the people and can cause disunity,” he said.