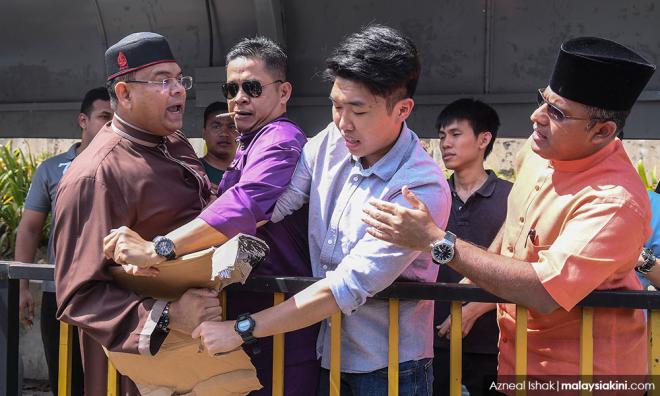 All university vice-chancellors should condemn the thuggish behaviour of a group of individuals who attacked undergraduate students (above) last Friday, said Education Minister Dr Maszlee Malik.

In a statement issued today, he said university authorities should not be afraid of stating the truth in line with the stature of a university.

“It is not right for university authorities to project an unclear stand and take the safe route when students are attacked by irresponsible parties. This took place a few days ago, and something similar could happen in other universities if everyone adopts a lackadaisical attitude,” he said.

Maszlee reminded university authorities to always support the students and their freedom as long as it was not something which contravened the laws of the country and university regulations.

Last Friday, the media reported that a programme with former prime minister Najib Razak at a restaurant opposite Universiti Malaya turned ugly when a scuffle broke out between Najib’s supporters and UM students.

A 2.21-minute video clip of the incident has gone viral on social media.

Expressing his concern over the incident, Ahmad Bashawir said the incident was an assault on the freedom of speech and democracy upheld by the Malaysian government.

"The university is of the view that students of higher institutions should be allowed to peacefully express their views and feelings.They should be given the opportunity and the space to exercise their rights to freedom of expression and peaceful assembly within the normal bounds of courtesy and respect," he said in a statement.

Ahmad Bashawir urged that the perpetrators against the UM students be investigated and individuals involved in inappropriate or criminal behaviour be dealt with in accordance with the law.

"We wish to send a clear message that such uncivilised act of thuggery will not be tolerated on UUM campuses. We also urge the authorities concerned to provide the necessary assistance to the affected students and take swift legal action against the perpetrators in the event a criminal act is proven," he said.