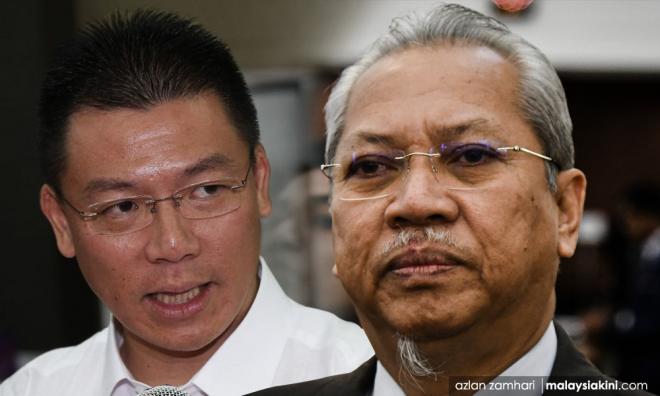 Umno will initiate legal action against Perak DAP chief Nga Kor Ming over his claim that Umno and PAS' rule would result in Malaysia becoming a Taliban state.

Umno secretary-general Annuar Musa said in a tweet today he had instructed a law firm to take the necessary action.

"Umno has decided to initiate legal action against an elected representative from a particular party who attempted to link and slander Umno with the Taliban.

"I have signed the letter this morning giving the mandate to a law firm to take action," his Twitter post read.

In a subsequent post, Annuar also responded to another Twitter user, who accused DAP of being racist.

"DAP might be racist, or it might not be... What is certain is that DAP practices a socialist and secularist policy. But everyone knows there are those amongst its leaders who are racist," the Ketereh MP said.

Nga, the Dewan Rakyat deputy speaker, had previously said that he would not apologise for making the remark.

"What is there to apologise for?" he had asked.

Nga reportedly told an event in Perak earlier this month that if an Umno-PAS alliance were to come into federal power, Malaysia could turn into Afghanistan under Taliban rule.

He said this alliance would harp on issues of race and religion to garner support, and once in power, would implement extreme policies to victimise both non-Malays and moderate Malays.

Earlier today, PAS president Abdul Hadi Awang penned a poem stating that those who compared the Islamist party to the Taliban were backed by Communists.

umnopasrule
talibanstate
annuarmusa
Related Reports
No business of the media to build inclusive narrative
a year ago
The problem with Umno and Umno Youth
a year ago
Is DAP a victim of Malay microaggression?
a year ago
Harapan urged to step up countermeasures against racial politics
a year ago