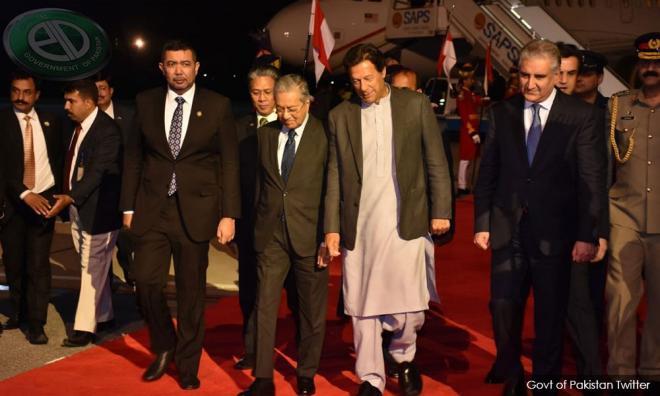 India, Pakistan blame each other after Dr M forced on longer flight path

Prime Minister Dr Mahathir Mohamad was forced to take a longer flight path during his trip to Pakistan last Thursday after his original flight route was rejected.

However, both Pakistan and India are blaming each other for making the Airbus ACJ319 Mahathir was flying in take a longer route.

Quoting sources, the Pakistani newspaper said: "The permission was withdrawn at the last minute, forcing the Malaysian premier to take a much longer route over the Arabian Sea and cruise as far as Oman before returning to Islamabad."

Malaysiakini sought clarification from the High Commission of India in Malaysia, which in turn referred to a report by India-based ANI News.

Specifically, the report said Islamabad has disallowed all flight paths entering the country via its neighbour.

"The truth is that Pakistan has blocked its own airspace from flights which are overflying India.

"Therefore, even though the directorate general of civil aviation had given overflight clearance to Malaysian prime minister's flight, it had to take a longer route because Pakistan denied permission.

"It is strange that even for their national day guest from Malaysia, Pakistan could not make an exception, thereby resulting in a longer flight by Malaysian prime minister," the official was quoted as saying.

India and Pakistan have imposed restrictions on each other following the escalation of tensions in Kashmir, a territory disputed by both countries.

This followed the Feb 14 suicide attack on Indian security personnel in Indian-administered Kashmir, which claimed 46 lives.

On Feb 26, the Indian Air Force launched a strike in Balakot, Pakistan against what it claimed was a militant base.

The following day, Pakistan launch a retaliatory strike in Indian-administered Kashmir, and shot down an Indian fighter jet that responded to the incursion, capturing its pilot.

The pilot was returned to India on March 1 as a "peace gesture."

Apart from the military actions, the two countries have also taken tit-for-tat measures, including banning each other's films and cancelling sporting events.