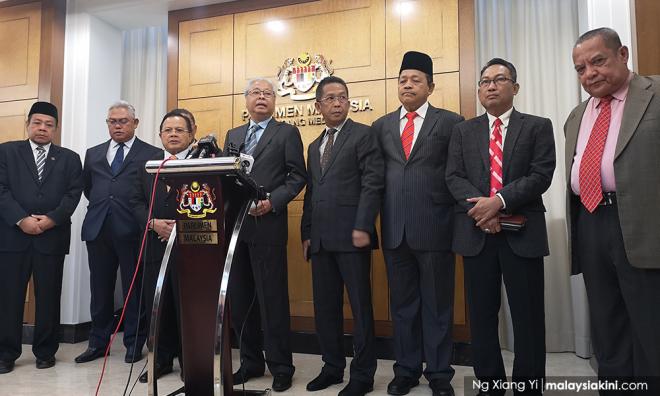 Opposition can chair PAC after all previous scandals cleared

ADUN SPEAKS | The demand for Ronald Kiandee to resign as the chairperson of the Public Accounts Committee continued this week with the mass resignation of BN and PAS members from the committee on Monday.

On the same day, Kepong MP Lim Lip Eng claimed that most backbenchers wanted Kiandee out. On Tuesday, former president of the Malaysian Bar Ambiga Sreenevasan said Kiandee should step down or be removed with immediate effect.

The Pakatan Harapan manifesto promised that “The chairperson of the PAC will be reserved for an opposition MP." Lim said Harapan must fulfil the manifesto promise and there are no two ways about it. Ambiga also said there should be no compromise.

A candidate that had been proposed by the opposition was Wanita Umno chief and Parit Sulong MP Noraini Ahmad. She was also a member of the PAC.

While the nomination of Noraini (below) appears reasonable, Dewan Rakyat Deputy Speaker Nga Kor Ming believes the cabinet should only replace Kiandee at an appropriate time.

The PAC is hearing many cases involving millions and billions of ringgit blatantly misused or syphoned off by the previous government. The role of the PAC is to provide check-and-balance to the government of the day responsible for the cases being heard.

Harapan was the opposition when these wrongdoings were committed. It may be more appropriate for BN to take over the chair of the PAC only after the cases from the previous administration are cleared – or two years after any change of government.

The chairperson and the committee members should also be vetted by the MACC and categorically declare any conflict of interests, whether they ever received any payments or gratuities from the parties investigated.

Secondly, the chairperson and opposition members of the PAC should be required to declare their assets and income to the MACC’s asset declaration portal and to be free from corruption.

As Harapan MPs and senior government officers are already required to declare their assets, the opposition MPs should declare their income and assets before they are allowed to be the chairperson or members of the PAC.

Thirdly, and most importantly, BN and PAS should also promise that the chair of the PAC is reserved for the opposition should they win back power. This amendment has to be written into the Parliament’s Standing Order to make this a bipartisan agreement and sacrosanct.

We cannot have an opposition that practices double standards, should it become the government again.

In summary, Harapan will fulfil its election manifesto promise to reserve the chair of the PAC for an opposition MP. This may be done once the mega-scandal cases involving the previous government are heard.

The opposition members of PAC should themselves be clean and free from corruption and must agree to uphold the same practice when they are in power by supporting its amendment into the Parliament’s Standing Order.

DR KO CHUNG SEN is the state assemblyperson for Kepayang. He is writing this comment piece in his personal capacity.