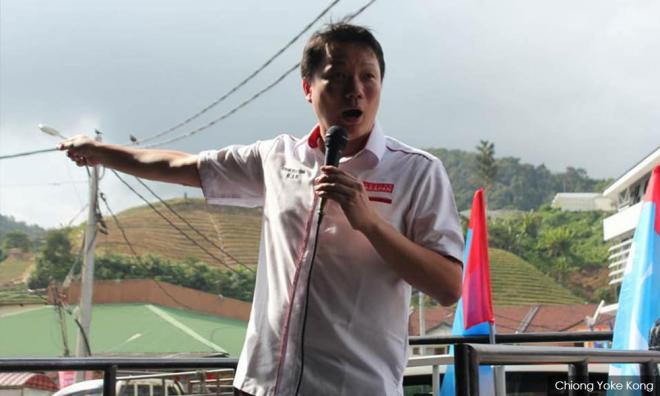 Tanah Rata assemblyperson Chiong Yoke Kong has called on the BN-led Pahang government to stop evicting farmers in Cameron Highlands and offer them an adequate exit plan instead.

Chiong said this is as the second phase of enforcement, involving 50 farms, is set to begin on April 11.

In the first phase, 61 farms located upstream of Sungai Ichat were evicted, as the Pahang government cited the need to prevent the Kuala Terla water catchment area from being further polluted.

“Seeing as how the state government’s actions have resulted in confusion among farmers in Cameron Highlands, I call on the state authorities to postpone enforcement action and hold dialogues with farmers there, so a win-win solution can be found.

“Besides enforcement, the state authorities should offer the evicted farmers a way out,” he said in a statement today.

Chiong claimed that the farmers concerned were not trespassers, but rather, have farmed “small time” in Cameron Highlands for many years.

He added that the Pahang government has failed to provide a satisfactory explanation for the evictions, and pointed to “confusing statements” on the temporary operating licences (TOLs) issued to farmers.

“The state authority claimed the earliest TOL issued was in 1993, but we can prove there are farmers who got their TOL in 1971, or 48 years ago.

“Why are they repeatedly making untrue claims against these farmers? Was the decision to take enforcement action done in a rush without thorough examination?

"Or is the aim to tarnish the farmers’ names so they do not obtain the rakyat’s sympathy?” he said.

A photo sighted by Malaysiakini showed that one of the TOLs was issued in 1971. The authenticity of the document has yet to be verified, however.

Chiong was commenting on the case of the eviction of farmers in Cameron Highlands, who Pahang Menteri Besar Wan Rosdy Wan Ismail (below) claimed were polluting Sungai Ichat – one of the rivers that supply water to residents.

As such, Wan Rosdy had said the state had no option but to carry on with the enforcement actions against the farms located upstream of the river.

This was contested by Penang Deputy Chief Minister II P Ramasamy, who claimed that the affected farmers had been tilling the land for over 60 years.

He also noted that it is Sungai Terla that supplies water to residents, not Sungai Ichat.

The move, Ramasamy claimed, was politically motivated as the farmers were allegedly ”supporters of Pakatan Harapan in the recent Cameron Highlands by-election.”

These claims were later quashed by the menteri besar, who said there was little evidence that the farmers had been there for more than six decades, adding that TOLs were only given to the farmers over 20 years ago.

Wan Rosdy also added that both Sungai Ichat and Sungai Terla are raw sources of water for the Kuala Terla water catchment area.