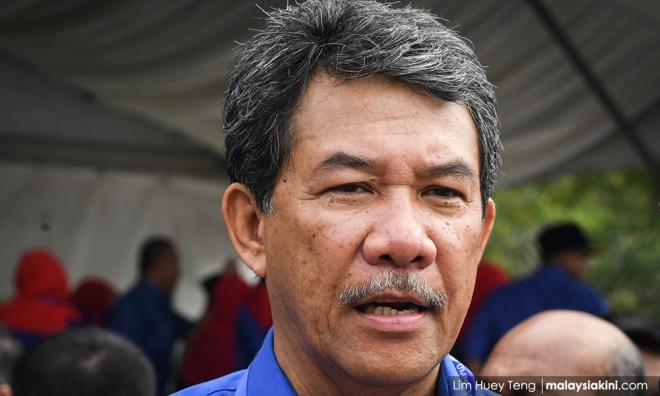 "All these while you have been saying you have prepared the charges for Najib. (So) what is taking you so long?

"That means all this while you said charge sheets have been prepared, that is just falsehood. Now they can't even solve the 1MDB case.

"You said so much before the 14th general election - this and that - but now you have been in government for 10 months already.

"In and out. I pity Najib, going in and out every day," Mohamad told reporters in Rantau today. He did not say whether he meant in and out of court or in and out of the MACC's custody.

The BN Rantau candidate was clarifying a "news portal’s" report, which he claimed had wrongly cited him as saying he wants Najib to be jailed.

Malaysiakini this morning published an article where Mohamad had questioned why Najib has not been arrested or charged if the 1MDB scandal was a real problem.

"If 1MDB is truly a problem, you charge Najib. You used to say the charge sheets had been prepared, there has just been no arrest. So why has there been no arrest?

"It is not that I want Najib (photo, below) to be arrested, but these are all lies, all slander, pure lies," he had been quoted as saying by Malaysiakini.

He had made the remarks at a ceramah in Felda Sendayan last night.

'No need for so many charges against Najib'

Najib had been slapped with 42 charges of money laundering, criminal breach of trust and abuse of power.

Of these charges, 25 are related to 1MDB, six are on 1MDB's settlement with Abu Dhabi's International Petroleum Investment Co and one over the alleged tampering of the National Audit Department's report on 1MDB.

Najib has also been arrested several times by the MACC.

Mohamad said his remarks last night was just "a figure of speech".

Elaborating further, Mohamad said there was no need to slap Najib with so many charges.

"If you have a really strong case, you just need one charge.

"So, whether they're being dramatic or what, I don't know," he said.

The Umno acting president also questioned why the government has not arrested fugitive businessperson Jho Low (photo, above).

"Low is the main individual... If this was a film, he is John Wayne, the main actor. Why hasn't he been arrested? Arrest him," he said.

Low is believed to have masterminded the 1MDB scandal. His whereabouts are currently unknown, although there are suspicions that he has been going back and forth between China, Hong Kong, and Macau.