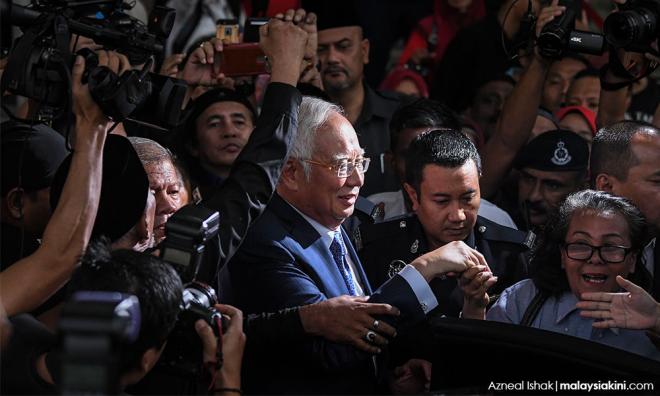 He is accused of criminal breach of trust and money laundering in relation to funds belonging to the former 1MDB subsidiary.

Attorney-general Tommy Thomas will be leading the team of 12 prosecutors, while Najib's defence team consists of 11 members, led by Muhammad Shafee Abdullah.

Today's hearing will be presided over by Justice Mohd Nazlan Mohd Ghazali.

In addition, three lawyers will be holding a watching brief: AG Kalidas and Rajsurian Pillay for the Bar Council, and Revin Kumar for Najib's wife Rosmah Mansor.

Malaysiakini brings you live reports below.

7.15pm - Thank you for following our live report today.

It is Najib’s right to clarify charges, says defence counsel

6.15pm - Najib Abdul Razak's lead defence counsel Muhammad Shafee Abdullah reiterates that there is no attempt to delay the trial, and it is the accused person's right to clarify the charges before the trial starts.

"I and the whole team are quite surprised that the prosecution did not understand the importance of what we have requested today," he tells the media when leaving the court.

Shafee said that any complaint about the charges must be raised before the start of the trial, which is why the defence team did so today.

He further stated that if the prosecution is ready to clarify the charges, there would be no delay in the proceedings.

"Two Courts of Appeal have said that the defence has not delayed (the trial), so we don't care what the attorney-general said, because his opinion is not relevant to us," he added.

5.40pm - Najib Abdul Razak leaves the court complex, surrounded by about fifty supporters chanting "Allahuakbar Takbir" (Allah is greatest) and "Malu apa bossku?" (What's there to be ashamed of, my boss?)

He walks across the lobby, smiling, and leaves in a car without speaking to the media.

5.36pm - The first day of Najib Abdul Razak's trial draws to an end. Justice Nazlan fixes April 15 to May 10 for the trial to continue.

He says some degree of priority must be given due to overwhelming public interest in the case.

Shafee: There can only be one general

Thomas proposes that the trial should continue on April 8 and 9, before taking up other dates which had been fixed for the 1MDB hearing.

However, Najib Abdul Razak's lead defence counsel Muhammad Shafee Abdullah objects to this. He informs the court that holding hearings this coming week would be inconvenient for him, as he has other cases to attend at the Federal Court and Court of Appeal.

To this, Thomas argues that no single member of both the defence and prosecution should be indispensable.

He adds that the prosecution would also see its team members "go in and out" throughout the trial to attend other court cases.

This is why the prosecution and defence have large teams, says Thomas.

The attorney-general adds that the other members of the prosecution will not be asking for adjournment just because he (Thomas) is not available on any of the dates during which the SRC International hearings are scheduled to be held.

Shafee's co-counsel Harvinderjit Singh objects to Thomas' statement, arguing that they have other trials, dates of which had been fixed long before today's hearing began.

"How about our other trials? Is our client (Najib) not entitled to his counsel of choice?" asks Harvinderjit.

Shafee later also rises to say that he needs to supervise his team.

"There can be only one general. If there is more than one general, then (there is a) problem."

5.07pm - The prosecution's first witness, Muhamad Akmaludin Abdullah, is excused from the witness dock, with cross-examination expected to continue on the second day of the trial.

This comes after defence counsel Harvinderjit Singh informs the judge that he would have to change the questions framed to Akmaludin after the SSM deputy registrar appeared unable to fully understand what he was being asked about entries of records in the SSM system.

The parties then proceed to discuss subsequent dates for the trial.

Harvinderjit starts the cross-examination by asking Akmaludin to explain the process to obtain a list of documents in the SSM records pertaining to SRC International and a company named Yayasan Rakyat 1Malaysia (company number 1031163H).

"For this company, I will need to conduct a company search and (look up) all the details on all directors who had been appointed into the company from its incorporation up until this date (today)," Akmaludin says.

Harvinderjit then grills the witness on his knowledge of the submission process for company documents to SSM.

4.40pm - Muhamad Akmaludin Abdullah, who is the first witness to testify, tells the court that one Shairah Begum is a director of Gandingan Mentari.

The money from SRC was passed through two companies, including Gandingan Mentari, before it landed in Najib's bank account. The other company was Ihsan Perdana.

Gandingan Mentari was an SRC subsidary, while Ihsan Perdana was the corporate social responsibility arm of SRC.

Earlier, Malaysiakini erroneously reported that the witness identified the abovementioned director as "Faridah Begum", who is the wife of former AG Mohamed Apandi Ali. Malaysiakini regrets the error.

'We are ready to see justice done' - S'wak Report editor

4.20pm - Sarawak Report editor Clare Rewcastle-Brown leaves the court complex. She tells the media that she will continue to watch this trial from afar and occasionally come to court for the hearings.

Rewcastle-Brown says she managed to get into the video-link room to watch the trial, and that it had been interesting.

"It was good to see the trial finally go ahead, and I know there have been a lot of people who have been very anxious and affected by some of these events, who were wondering if this trial will get on the way.

"...We are ready to see justice done with a proper trial conducted," Rewcastle-Brown says.

She also reiterates that she will be resuming her focus on deforestation issues in Borneo.

Sarawak-born Rewcastle-Brown and the whistleblower site she established had played a key role in exposing the 1MDB scandal.

After Rewcastle-Brown leaves the court, a man who identifies himself as "Sofian Putra" leads a small group of Najib's supporters in loud cheers of "Allahuakbar Takbir" (Allah is greatest) and "Tolak media asing" (Reject foreign media).

They are eventually stopped from cheering by police officers, as it is against the rules to make noise in the court complex.

When approached, Sofian tells the media that foreign media are unwelcome because they made "Malays fight Malays" and they are “liars”.

3.25pm - The prosecution calls its first witness, a deputy registrar with the Companies Commission (SSM).

The witness, Muhamad Akmaludin Abdullah, 35, says his task includes providing information on companies and businesses to the public and government agencies.

Akmaludin testifies that he received a request from the MACC to run checks on records of three companies, namely SRC International, Gandingan Mentari and Ihsan Perdana.

He tells the court details of the companies as per SSM's records.

3.15pm - In his opening statement, attorney-general Tommy Thomas says the prosecution team will explain to the court how the accused engaged in money laundering by receiving RM27 million in his Ambank account in December 2014.

These monies were allegedly moved to other accounts, including that of several companies. Prosecutors will also tell the court of a Chanel shopping spree in Honolulu, house renovations, and funding for various BN component parties.

Thomas' opening statement can be read in full here.

2.50pm - Attorney-general Tommy Thomas argues the defence had ample time to challenge the charges against Najib.

He tells the court there is no reason for motions regarding the charges to be brought at the eleventh hour.

"This cannot go on. The defence is insulting intelligence. They had months to do this," he adds.

Defence lawyers Harvinderjit Singh and Mohd Yusof Zainal Abiden then submit to the court their arguments for a stay of the trial.

After listening to lengthy submissions from both Najib's defence lawyers and the prosecution, Justice Nazlan Mohd Ghazali rules that he will set another date for the application filed by the defence this morning.

Nazlan then orders for the trial to start.

Prosecution and defence clash over bid to stay hearing

Thomas then tells Justice Nazlan Mohd Ghazali that the prosecution is ready to proceed with their opening statement.

However, lead defence counsel Muhammad Shafee Abdullah rises and informs the court that the defence has filed a certificate of urgency this morning and requests that the court consider ordering a stay of the hearing.

Telling the court the defence will be challenging the validity of the charges brought against Najib, Shafee says he will let another defence counsel, Mohd Yusof Zainal Abiden, explain why the matter should be addressed before the trial starts.

Thomas then tells the court that the prosecution will object to this.

2.10pm - Sarawak Report editor Clare Rewcastle-Brown, who has researched and written extensively on the 1MDB affair, is at the Duta Court Complex.

She is hoping to hear first-hand how the prosecution lays out its case.

"You often get a lot of interesting information that maybe journalists were not aware of before," she says.

He claims Pakatan Harapan cannot pin anything concrete on the former premier after 11 months in power.

"I believe this is selective prosecution since the main witness Nik Faisal (Ariff Kamil Nik Othman Arif Kamil) is in charge of the trust fund under Najib's name.

"He (Nik Faisal) knew that the money should be banked into this account since Najib was one of the guarantors for SRC International to obtain funding," he adds.

Nik Faisal is the former director of SRC International.

Lokman claims that authorities should have questioned Nik Faisal first but had not done so.

"They are charging Najib first and investigating later," he says.

He also claims that even if there was a case, it should be for cheating under the Penal Code and not under the Anti-Money Laundering, Anti-Terrorism Financing and Proceeds of Unlawful Activities Act 2001 which is being applied now.

Najib's youngest son Norashman is in the public gallery. The former premier's wife Rosmah Mansor is not present.

According to a press handout, former solicitor-general II Mohd Yusof Zainal Abiden will join 10 others on the defence team.

Yusof had previously served as lead prosecutor against PKR president Anwar Ibrahim in the Sodomy II trial before representing the latter over his involvement in the Bersih 3.0 rally.

Najib's supporters: We are part of him

1.25pm - So far, there are about 20 supporters of Najib Abdul Razak at the lobby of the Duta Court Complex.

One man, who calls himself "Baha Taha", tells reporters that Najib "is the only right man to rule the country" and pledges to support the him "forever".

When reporters ask him how long he has been waiting outside the court complex, Baha Taha replies he will be there "permanently."

He expects "thousands" of supporters to turn up later.

"We are not supporters of Najib. We are part of him!" he adds.