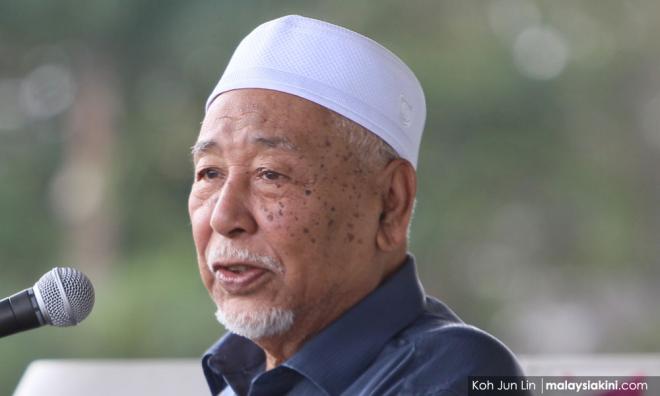 PAS has welcomed Malaysia’s withdrawal from the Rome Statute of the International Criminal Court (ICC).

Its spiritual leader Hashim Jasin (above) said it was a good move that would benefit Islam, and that PAS held to the principle of supporting any move that was for the good.

"We always welcome anything that benefits Islam… we will be together with the Prime Minister (Dr Mahathir Mohamad) on this,” he told reporters after opening the Kota Bharu PAS division’s 52nd annual general meeting in Kelantan today.

In the past, PAS has claimed that only its members are the true followers of Islam and even branded UMNO members who are mostly Malays, all of whom are Muslims, as infidels.

Yesterday, Dr Mahathir had announced that Malaysia was withdrawing from the Rome Statute following the confusion arising politically and within the society on it, stressing that the decision was not because the Statute was harmful to the country.

He said Malaysia, which acceded to the Rome Statute on March 4, could withdraw from it before June this year.

The decision to withdraw from the statute was made collectively at the cabinet meeting yesterday, Mahathir said.

He added that the decision was taken because certain people, who had their own vested interests, had misled people into thinking that Malaysia would lose its sovereignty and that the position of the Malays and institution of the Malay royalty would be affected because the country acceded to the statute.

However, he warned that even though Malaysia was withdrawing from the statute, “prince or pauper” would face the consequences if they broke the law.

The ICC was established in 2002 and governed by the Rome Statute.

The ICC is the first permanent, treaty-based, international criminal court, with the objective to end impunity against the perpetrators of the most serious crimes of concern to the international community, namely genocide, war crimes, crimes against humanity and crimes of aggression.