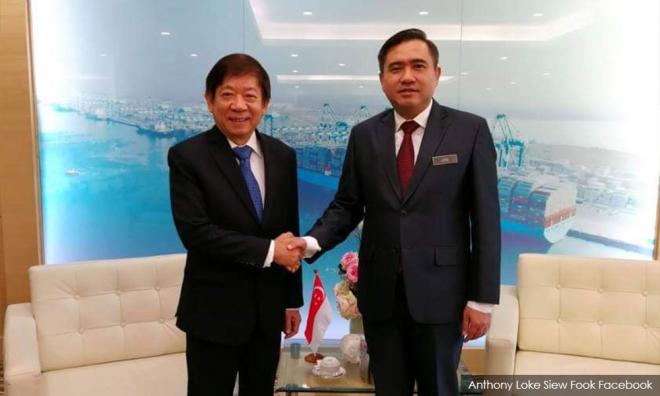 Malaysia is ready to handle its airspace in southern Johor which was delegated to Singapore in 1974, Transport Minister Anthony Loke said today.

He said this was among the outstanding and priority issues which were brought up at the bilateral meeting with his Singaporean counterpart Khaw Boon Wan at the KL International Airport in Sepang.

"This is our sovereignty issue. We wish to manage our own air space. That is our desire. For 45 years, the airspace has been delegated to Singapore. We are ready in (terms of) technical readiness.

"With these facilities, we are ready to manage our own airspace. That is our top priority in reviewing our agreement with Singapore," he said.

Last Saturday, Malaysia and Singapore agreed that in the spirit of bilateral cooperation, Singapore will withdraw the Instrument Landing System (ILS) procedures for its Seletar Airport while Malaysia will indefinitely suspend its permanent Restricted Area (RA) over Pasir Gudang.

The air disagreement first surfaced on Nov 23 last year when Firefly said it will suspend all flights to Singapore from Dec 1, 2018, the day it was supposed to move its operations from Changi to Seletar Airport.

Malaysia objected to the new landing procedures for Seletar, claiming that they would impose height restrictions and affect development in Pasir Gudang.

At today's meeting, the two transport ministers also noted that a high-level committee had been set up to review the Operational Letter of Agreement between Kuala Lumpur and Singapore Area Control Centres Concerning Singapore Arrivals, Departures and Overflights 1974 (LOA 1974).

"Besides Firefly, Malindo is also interested to fly to Seletar Airport, and we hope all flights will resume in the near future. In the spirit of bilateral cooperation, this is good cooperation and the way forward for Malaysia and Singapore," Loke said.

Khaw, meanwhile, said the high-level committee, co-chaired by the Singapore permanent secretary of Transport and Malaysia’s secretary-general of the Transport Ministry, has been set up to review the existing airspace arrangement under which the provision of air traffic services over southern Peninsular Malaysia has been delegated to Singapore.

"Malaysia has expressed its wish to take over control of the air traffic service provision in the airspace concerned and Loke stressed that the review was important to Malaysia," he said.

Khaw said he has assured Loke that Singapore will approach the review with an open mind, bearing in mind the many stakeholders involved and the critical need to ensure safety and efficiency in a busy airspace.

"With goodwill and compromise, I am sure that a win-win solution which does not undermine each other’s core interests can be found," he said.

Khaw said the civil aviation authorities from both countries will work together to develop GPS-based instrument approach procedures for Seletar Airport, replacing the Instrument Landing System (ILS) procedures, emphasising that the new procedures would ensure safety for flights landing and departing at Seletar Airport.

"We will introduce GPS-based instrument approaches from both the north over Pasir Gudang and south over Singapore. This is because airplanes take off and land into the wind. With north-east and south-west wind directions at different times of the year, both approaches are needed," he explained.

Earlier, Khaw paid a courtesy call on Loke at the KLIA in conjunction with the 9th Singapore-Malaysia Leaders' Retreat.