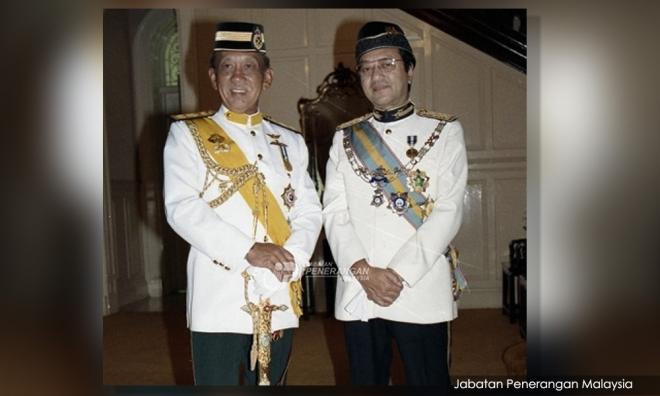 After bitterly announcing that Malaysia would be withdrawing from the Rome Statute of the International Criminal Court (ICC) – no more than a month after inking the treaty - Prime Minister Dr Mahathir Mohamad claimed there was a plot to pit his administration against the Malay rulers.

He also complained about one person in particular who had sown confusion over the matter because the latter wanted to be “free to beat up people and things like that.”

“If he beats up people again, I will send the police to arrest him. I don’t care who he is,” he had said.

Though he did not mention names, speculation was rife that Mahathir was referring to the Johor palace, with whom his ties had been strained since his first tenure as premier - during the reign of Sultan Iskandar Sultan Ismail (above photo, left), the father of the present ruler, Sultan Ibrahim Sultan Iskandar.

Sultan Iskandar was also the eighth Yang di-Pertuan Agong from 1984 to 1989, at a time when Mahathir was in power.

Describing Mahathir as a “thoroughly modern prime minister”, UK’s Independent in an article published on Jan 31, 1993 said attacks on the rulers' power had been a theme of his time in office after he took the reins from Hussein Onn in 1981.

“In 1983, he sought to remove the king's right to block legislation, and last year (1992) pressed the rulers to sign a code of conduct barring them from politics and most commercial activities. Sultan Mahmood (Sultan Iskandar) was among three rulers who refused to accept the ban,” it added.

The Independent article reported the successive power struggles between Mahathir and the sultans, which incidentally involved an alleged beating in 1992.

In a dramatic portrayal of what transpired, the newspaper said: “Douglas Gomez, a Malaysian hockey coach, probably knew what to expect when he was summoned to the palace of the sultan of Johor, (Sultan) Iskandar (Sultan) Ismail. The 60-year-old ruler, who has a Lear jet, eight palaces and a 200-man private army, is known for his violent temper...

“As Mr Gomez went for his interview with the sultan, his mind must have gone back to last year's Malaysian Games, when the hockey final was contested between the states of Johor and Perak. The Johor team was led by the sultan's son, Prince Abdul Majid Idris (Tunku Abdul Majid Idris Sultan Iskandar). Perak won...

“Reporters were waiting for the hockey coach when he emerged an hour later. Although Mr Gomez was visibly shaken and bruised, he refused to say anything: apart from the immunity from prosecution enjoyed by Malaysian rulers, any criticism of them can be held by the sultans themselves to amount to sedition.”

The incident stemmed from Tunku Abdul Majid allegedly kicking and slapping the Perak goalkeeper until the latter fell unconscious. The prince was charged but later acquitted. He agreed to pay the goalkeeper RM1,000 in compensation.

The Malaysian Hockey Federation banned Tunku Abdul Majid for six months and this upset the palace, which purportedly ordered Johor teams to withdraw from tournaments. And when Gomez complained about this, he was summoned to the palace.

Though initially choosing to be silent over what transpired during his audience with Sultan Iskandar, Gomez, however, later took the unprecedented step to lodge a police report instead.

The Independent article said Gomez told the police that “after a lecture from palace staff on proper respect for the ruler, he was taken in to see the sultan. There he was rushed by a group of men in jeans, who joined the sultan in beating him up.”

Mahathir used the Gomez incident as leverage to once again impose the code of conduct as well as to remove the rulers' immunity from prosecution and the ability to pardon themselves and their families.

“The sultans rejected the proposals but Parliament voted to amend the constitution anyway, and a crisis looms as the legislation awaits the king's signature.

“In the meantime, the government is waging all-out war on the rulers. Civil servants have been told to seek the prime minister's permission before seeing the king, state governments are under orders to refuse business favours to their rulers.

“For the past month, page two of the government-controlled New Straits Times has been devoted to the sultans' excesses: how Sultan Ismail Petra of Kelantan, for example, imported 30 duty-free luxury cars rather than the seven allowed, and how he got away from customs officials in a Lamborghini Diablo on the pretext of test-driving it.

“The RM200 million cost of maintaining the rulers has been lavishly detailed, including the hospital wards kept for their exclusive use, and the RM9.3 million spent on new cutlery and bedspreads for the king, which the newspaper said could have built two hospitals, or 46 rural clinics or 46 primary schools.

“Religious teachers have been encouraged to comment on the un-Muslim behaviour of the supposed guardians of Islam,” said the Independent.

The changes in the constitution were eventually implemented in March 1993 and sultans who violated the law could be prosecuted in a special court.

On March 23, 2016, the current Johor ruler's son and heir to the throne, crown prince Tunku Ismail Sultan Ibrahim (photo) - who locked horns with Mahathir over the Rome Statute - recalled the incidents during the constitutional crisis when he was eight.

He reminded the government not to repeat such “greed driven episodes”.

"I will never forget the constitutional crisis. I still remember how my family was treated by federal government officers.

"I remember things such as trying to disband the Johor military force, Johor exco members were told not to receive my late grandfather at the airport, how JKR (Public Works Department) was told not to fix and maintain anything at any of the Johor palaces.

"My mother was even stopped by the Malaysian customs upon entering Johor from Singapore. She was told to step out of the car because they wanted to inspect everything in the car. I still remember everything and I still remember the individuals responsible for it," he said in a Facebook posting.

The next day, Gomez's son Brian responded, also on Facebook, saying that he too remembered the incidents which took place.

"I still remember, in the midst of the struggle between two giants, the common rakyat was the one who stood up and brightened the way,” he added.

Brian also recalled how his father had returned home from the palace with a black eye.

"I still remember his story about what happened in the palace and to whom the hand which caused the black eye belonged to," he said.

Mahathir has suffered a setback in his latest tussle with the rulers, having been forced to nix his Rome Statute plan - an issue which is close to his heart. He had time and again spoken strongly against war crimes when he was in the Perdana Foundation.

But this is not likely to be the end of the clash. Expect Mahathir to mount a counter-attack. Watch this space.

dr mahathir mohamad
rome statute
sultan iskandar sultan ismail
sultan ibrahim sultan iskandar
tunku ismail sultan ibrahim
editorspick
editors pick
Related Reports
Action will be taken if prince makes seditious remarks, says PM
a year ago
Rome Statute: Johor sultan thanks Putrajaya for listening to people's voice
a year ago
PM withdrew from Rome Statute to avoid clash with royals - Anwar
a year ago
'Because of a person who wants to be free to beat up people' - read Mahathir's transcript
a year ago