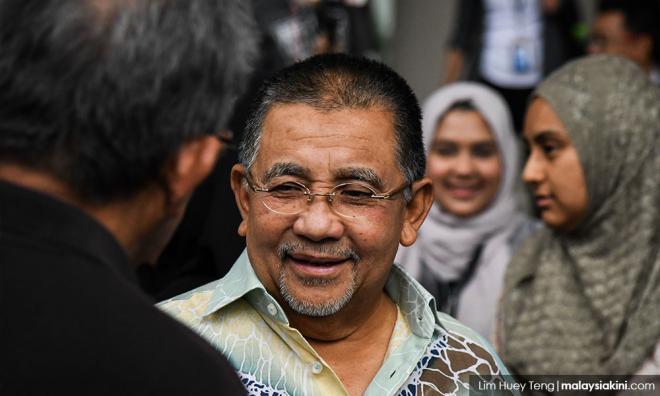 The trial of former Felda chairperson Isa Samad, who was charged with one count of criminal breach of trust (CBT) and nine counts of receiving gratification totalling over RM3 million, will take place for 13 days beginning Oct 7 at the High Court in Kuala Lumpur.

Judge Mohd Nazlan Mohd Ghazali fixed the date after Isa, 70, maintained his not guilty plea on all charges at the High Court today.

Today is the first mention of the case at the High Court after the matter was allowed to be transferred from the Sessions Court.

Earlier, the charges were read out to him by a court interpreter and when asked whether he pleaded guilty or not, Isa said "Claim trial".

Isa was charged, as director of Felda Investment Corporation Sdn Bhd and trusted with the company fund, with committing CBT by approving a proposal for the purchase of Merdeka Palace Hotel & Suites in Kuching, Sarawak, for RM160 million without the approval of the Felda board of directors.

He was charged with committing the offence at Level 50, Menara Felda, Platinum Park, No 11, Persiaran KLCC near Kuala Lumpur on April 29, 2014.

The charge was framed under Section 409 of the Penal Code, which provides for imprisonment up to 20 years, whipping and a fine, if found guilty.

On the corruption charges, Isa was charged with dishonestly receiving gratification for himself, in cash totalling RM3,090,000, from Ikhwan Zaidel, who is a board member of Gegasan Abadi Properties Sdn Bhd, through one Muhammad Zahid Md Arip, as gratification for helping to approve the purchase of the Merdeka Palace Hotel & Suites by FIC Sdn Bhd, for RM160 million.

The charges were made under Section 16(a)(A) of the Malaysian Anti-Corruption Commission (MACC) Act 2009, punishable under Section 24(1) of the same law, which provides a jail term of not exceeding 20 years and a fine of at least five times the bribe amount, or RM10,000, whichever is higher, upon conviction.

DPP Allan Suman Pillai asked the court to maintain the bail of RM800,000 imposed on Isa when he was first charged in the Sessions Court.

Allan also informed the court that all documents pertaining to the case had been submitted to the defence team under Section 51A of the Criminal Procedure Code but there were three incomplete documents which would be submitted this week.

Judge Mohd Nazlan set the same bail and ordered Isa to surrender his passport to the court. The court also set May 13 for case management.