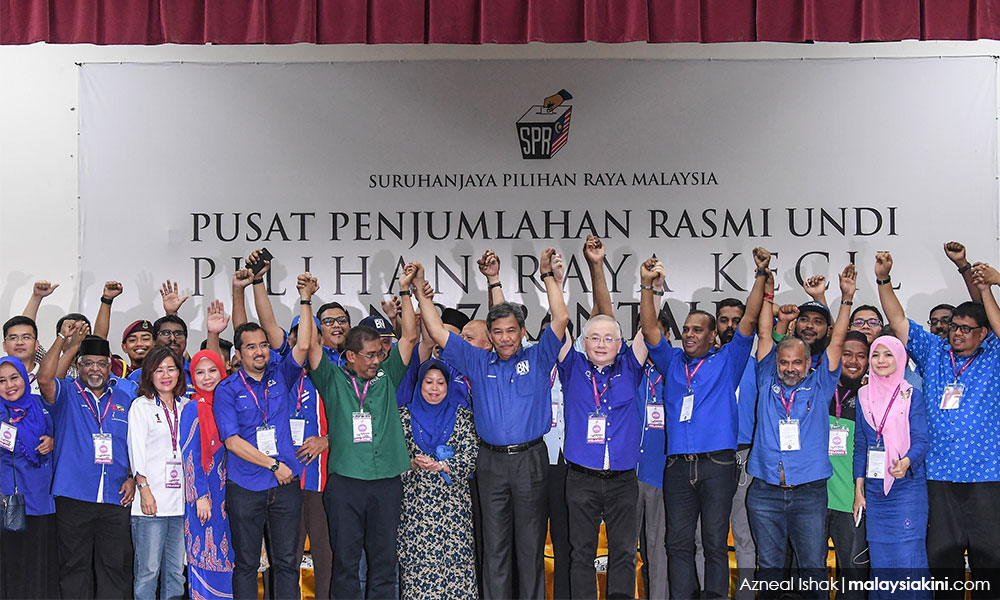 This wraps up Malaysiakini's coverage of the Rantau by-election.

Reporting by Zikri Kamarulzaman and B Nantha Kumar; photography by Azneal Ishak; graphics and social media by Syariman Badrulzaman and Ewe Ying Yenn.

"I congratulate the machinery of PAS and PAS supporters' wing for assisting (BN) in the Rantau by-election, including PAS members who voted today," he says in a statement.

PAS did not contest in the Rantau by-election but instead, campaigned for BN.

9.40pm - The number of revellers celebrating Mohamad's victory outside SJK(C) Bandar Sri Sendayan, which acts as the tallying centre, grows to over 1,000 people.

The sound of cheers and vuvuzelas echo in the night.

"The people rejected them, that is why I won comfortably.

"People are growing tired of the politics of slander, blaming others... doesn't lead anywhere," he tells a press conference after the EC announced the official results.

Mohamad says people want to know how the government will lead the country through political and economic instability.

Anwar: Defeat a reminder for Harapan

Anwar, who spent a large part of his time campaigning for Harapan's candidate Streram, said the defeat is a reminder for the new ruling coalition.

"I am confident that after this, Harapan will rise again to garner the people's support," he said in a statement.

8.45pm - The EC announces BN's Mohamad Hasan as the winner of the Rantay by-election.

Supporters cheer when the returning officer announced Mohamad garnered 10,397 votes and boo when it was revealed that Harapan's Dr S Streram received 5,887 votes.

Mohd Nor and Streram were absent from the tallying centre when the announcement was made.

The turnout for the by-election was 79.3 percent. There were 146 spoilt votes.

Outside the polling centre, jubilant BN supporters are celebrating.

"Tok Mat's win in Rantau sends a clear message that they reject Pakatan Harapan which they had mistakenly chosen in the last general election.

"Tok Mat is also the most suitable assemblyperson for the people of Rantau even though they (voters) were taking a risk in choosing an opposition candidate," he says in a statement.

Zahid is presently on leave after facing pressure from grassroots to step aside. Mohamad is the acting Umno president in his absence.

8.10pm - At SJK(C) Bandar Sri Sendayan, which serves as the tallying centre, more than 100 BN supporters have gathered outside the school to celebrate.

Quick analysis: Harapan defeated in all but one polling district

8.05pm - Harapan defeated in all but one polling district in Rantau.

Even so, Harapan's support in Bandar Ekar sees a decline from 70.3 percent in the last general election (parliamentary level) to 60 percent in this by-election.

This is in contrast to Harapan capturing half of the 14 polling districts in the last general election at the parliamentary level.

BN sweeps 13 of the polling districts in this by-election including Pekan Sagga (63.7 percent Indians) and Linsum (48.3 percent Indians) which have the highest and second highest proportion of Indian voters in Rantau.

7.45pm - A fight erupts at the Harapan command centre following news of Streram's defeat in the Rantau by-election.

Tempers flare when a PKR member from Kuala Lumpur blames local members for the outcome, and this results in a shouting match where expletives are hurled.

Within minutes, the situation escalates and punches are thrown.

7.30pm - With almost all the votes counted, independent candidates R Malar and Mohd Nor Yassin have so far only garnered 83 and 79 votes respectively.

This is far below the one-eighth of the more than 16,000 votes cast required to keep their deposits.

7.15pm - The BN command centre in Rantau erupts in celebration upon learning of Mohamad's unofficial victory.

The Umno acting president pumps his fists as the crowd cheers.

Based on Malaysiakini's calculation, Mohamad surpasses the minimum threshold for victory.

Malaysiakini estimates the turnout to be approximately 79 percent of the 20,926 eligible voters.

Please support Malaysiakini, be a subscriber

For 20 years, Malaysiakini has been covering elections, big and small. This involves heavy investments - in time and human resource - to play electoral watchdog and help voters make informed choices.

Pekan Sagga has the most proporition of Indian voters in Rantau, at around 63.7 percent. Malays make up 19.5 percent and Chinese16.8 percent.

Mohamad garners 56.57 percent of the votes in Pekan Sagga while Harapan 42.7 percent.

In the last general election, Harapan won 51.98 percent of the votes in this polling district whereas BN received 44.23 percent and PAS 3.78 percent at the parliamentary level.

Kampung Sega has the highest concentration of BN supporters in Rantau.

In the last general election, BN won the polling district with 68.98 percent of the votes at the parliamentary level. Harapan won 24.06 percent.

This means BN improved its performance in the polling district by almost 20 percent.

There are a total of 14 polling districts in Rantau.

6pm - BN sweeps the early and postal votes. The coalition garners 113 votes whereas Harapan gets a mere 10 votes.

These votes are mostly comprise that of police officers and civil servants.

Highest turnout yet after GE14

5.45pm - The Rantau polls is slated to witness the highest turnout in a by-election since the 14th general election.

According to the EC, the turnout at 4pm, 90 minutes before polls closed, was already at 74 percent, exceeding the final turnout in the Semenyih by-election which recorded the highest to date.

The turnout in the previous polls after the 2018 general election are:

The EC has taken measures to encourage a highter turnout in this by-election, including mailing all 20,926 voters in Rantau their voting details.

5.30pm - Polling stations in Rantau have closed. Counting is now underway to determine the winner in the four-cornered contest.

The by-election was called after the Federal Court upheld a decision to nullify Mohamad's victory in the seat during the 14th general election.

The former Negeri Sembilan menteri besar won the seat uncontested after the EC returning officer barred Streram from filing his nomination papers, resulting in the latter filing an election petition.

rantau
live
byelection
Related Reports
EC upset over candidates operating 'pondok panas'
a year ago
No gastronomic discrimination - Kulasegaran 'eats in all eateries'
a year ago
Rantau sees highest turnout since GE14 as polls close
a year ago
On eve of polling, BN turns to prayer
a year ago