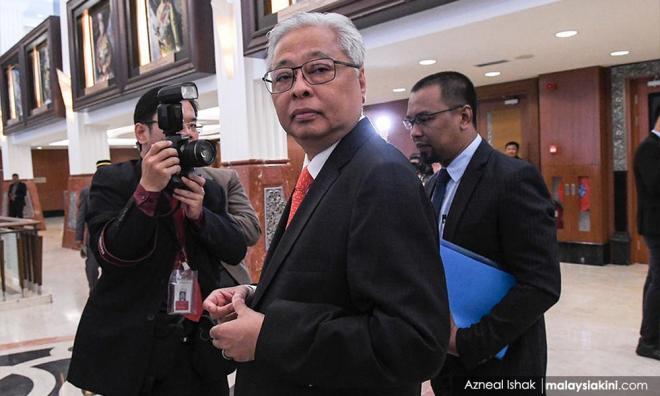 Yoursay: If Harapan gets an 'F', what would BN's grade be?

YOURSAY | 'This assessment by the opposition cannot be trusted at all.'

I can't believe Ismail mentioned the national debt. It was him and his party Umno that are responsible for that.

When a politician makes a remark like this, it is childish and seen as such by the people. An ‘F’ would mean Harapan has sent the country into disrepair.

If you want people to listen and believe you, give a proper grade. Sure, it's not 'A+', but it certainly isn't an 'F'. Shows how out of touch the opposition is now.

Nain: @Well That's Fantastic, Ismail is not a good leader as he would likely give former prime minister Najib Abdul Razak’s administration an 'A+' for creating the 1MDB, Tabung Haji, KWSP, Felda and other GLC scandals.

Najib is charged with money laundering, criminal breach of trust and stealing people's money. When Harapan is putting in efforts to reduce the country’s debt, he gives an 'F' grade. Najib must be living somewhere else.

Anonymous_1372516784: What grades do you expect from the opposition? Of course, they will say nothing good about the Harapan government.

If they admit the Harapan government is good, then they are admitting that the BN-era government was bad.

Common sense, isn't it? This assessment by the opposition cannot be trusted at all.

Drngsc: You do have a right to your opinion, Ismail. However, it is clear that the people of Malaysia will give Umno an 'A+' for stealing from the people when they were in power.

People suffer: Those who failed in an examination held over 60 years cannot grade the newcomers who are in the midst of preparing for the exam.

MalaysianMalaysian: Yes, Ismail, multiple 'F's – for not stealing, for not overpricing contracts, for not doing shoddy jobs, for being better and more productive and civil than Umno-BN, just to name a few.

Anonymous_1527925538: With all the multiple scandals exposed, the previous regime should get multiple 'Z's.

9th of May: This guy got an 'F' during his time in Umno. Remember the bumiputera dealers-only digital malls he created? It all failed.

And you want to know what BN got during their administration? 'A1' for looting the country’s coffers.

Anonymous_1548935682: Spot on, Ismail! The indicators are there in the by-elections – Cameron Highlands (DAP lost), Semenyih (Bersatu lost) and soon Rantau (PKR to lose?).

Cogito Ergo Sum: If the survey by think-tank Ilham Centre is correct, and BN is on track to winning the Rantau by-election this Saturday, then it means that Harapan has failed to communicate the wrongdoings of Umno-BN and what they are doing to salvage the situation.

If it is another straight loss for Harapan, it will reflect poorly on its election machinery and their lack of political maturity.

Lodestar: I think we should prepare for an Umno victory in Rantau. Even if the survey is wrong by a wide margin, BN candidate Mohamad Hasan would still win.

Harapan needs to look into the mirror and examine its flaws. The fact that Umno seems to be surging back, despite daily exposure of how utterly corrupt BN was during its tenure, and the fact that the kleptocratic Najib can become a folk hero, points to a systematic failure in communication.

Harapan needs to put in more effort and devise creative ways to get its message across.

So Felda was shamelessly looted, but how would poor farmers know that they were stolen from? Why not get a roadshow together to tour Felda villages and present the truth in simple terms?

So Tabung Haji depositors got very low interest this year? Don't let Umno blame the Harapan government. Send a letter to every depositor with Mahathir's signature on it to explain the previous years' fake accounts.

If the survey results do come true, this means that Harapan should no longer take non-Malay votes for granted. Don't fight the racism of Umno and the religious intolerance of PAS by adopting similar tactics to woo the Malays, because that is going to drive away non-Malays.

Cara Delevigne: Spot on prediction! I'm with Harapan, but won't be the least bit surprised if Indian and Chinese voters in the constituency choose Mohamad.

Seriously, it really is no contest. The former Negeri Sembilan menteri besar should win by a comfortable margin of at least 3,500 votes.

Anonymous_3f4b: Very good. Make it 3-0 against Mahathir's Harapan in the space of a few months.

After the fiasco of the withdrawal from Rome Statute of the International Criminal Court, the abrupt resignation of the Johor menteri besar and the disgraceful defeat of the constitutional amendment bill, Harapan needs to learn a lesson on principles, specifically on keeping their promises.

They need to learn to be practical, cut out the rhetoric, and be humble.

Quigonbond: So what if Harapan candidate Dr S Streram loses? At least he now has a fair chance of a fight, unlike in last year's general election.

If the poll is so dire for Harapan, let's see if the voting pattern really reflects the sentiment. Survey respondents think Malays are not being protected, promises are not being kept, etc.

But whatever Harapan is doing, it's still better than living under BN. You don't get money for free. You only get handouts because there are serious leakages elsewhere.

Your children's children are paying for the embezzlement into the future. More importantly, if you want reforms, you should make sure PKR wins because, compared to Bersatu, they are more reformist minded.

Jonah 2: Harapan should have brought in Rafizi for the Rantau polls. Streram may not be the right guy at this time, with Harapan being unable to govern, and the sitting menteri besar being a total clown.

Besides the horrible economy, Harapan has made so many errors in Negeri Sembilan, including the stupid golf club thing, closing down a vital dialysis centre, and literally zero development since winning in 2018.

These are rural folk. Their needs are simple. And if Harapan can't even meet their simple needs, they are goners.

All these voters chose Harapan due to the GST and Felda going bankrupt. But their lives have not changed – besides Anwar becoming the MP for nearby Port Dickson.

Harapan needs to move fast, or they are finished for good.