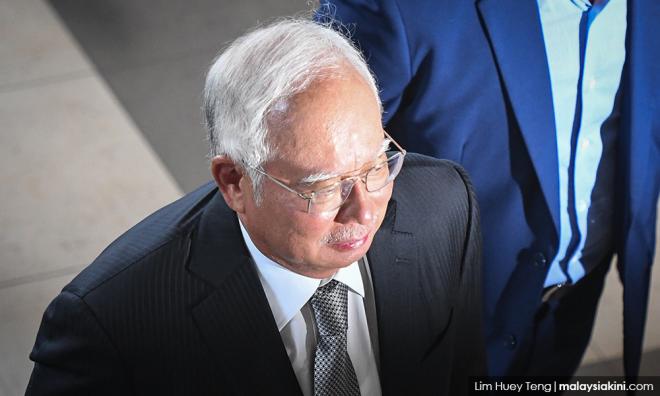 The High Court in Kuala Lumpur was today told that former prime minister Najib Abdul Razak was one of the directors of Yayasan Rakyat 1Malaysia.

Muhamad Akmaludin, who is the first prosecution witness, said this when cross-examined by Najib’s lawyer Harvinderjit Singh, at the hearing of the former prime minister’s case involving SRC International Sdn Bhd’s funds amounting to RM42 million.

Harvinderjit: The directors of Yayasan Rakyat 1Malaysia as on the date of printing of this document are as follows: Che Lodin Wok Kamarudin (Tan Sri), Mohd Najib Razak (Datuk Seri) and Wan Ahmad Shihab Wan Ismail (Datuk) who were appointed on Jan 11, 2013, the date of the establishment of the company.

Muhamad Akmaludin, 35, who has been with CCM since 2007, also confirmed that when SRC International Sdn Bhd was established on Jan 7, 2011, the company shares were not owned by 1MDB.

Harvinderjit: Since the date of SRC’s establishment, the shares were not owned by 1MDB?

Muhamad Akmaludin: Right, I confirm the shares were not owned by 1MDB.

Harvinderjit: Based on information given on the date of the company’s establishment, the company's name still remain as SRC International Sdn Bhd?

Harvinderjit: Meaning that the company, since the beginning of its establishment, was named SRC International Sdn Bhd?

Harvinderjit: From all documents of 1MDB Energy Sdn Bhd, there was no indication that SRC was the owner of its shares?

In his testimony, the witness said he agreed with the lawyer’s suggestion that there was a resolution on the issuance of 999,998 SRC share units to 1MDB Energy at a meeting held by SRC shareholders on Aug 15, 2011.

Najib, 66, is facing three counts of criminal breach of trust, one charge of abusing his position and three counts of money laundering over SRC International funds amounting to RM42 million.

The Pekan MP, who is also the sixth prime minister, was charged with committing the offence at AmIslamic Bank Berhad in Jalan Raja Chulan and the Prime Minister's Office in Putrajaya between August 17, 2011, and Feb 10, 2015.

The trial before Judge Mohd Nazlan Mohd Ghazali is in progress.