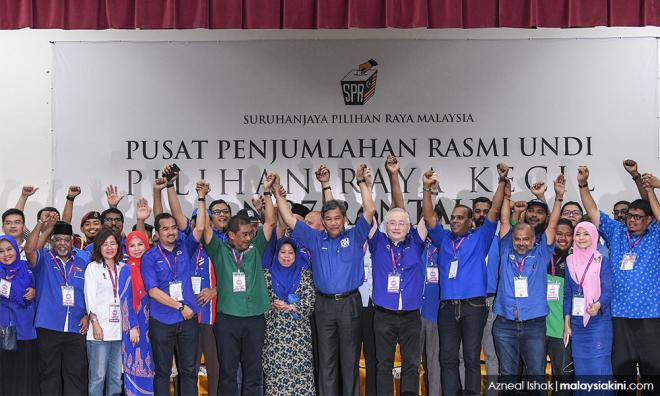 However, the former defence minister cautioned against becoming arrogant.

“InshaAllah, our ground machinery will maintain this strength for future by-elections.

“But my advice is to not be arrogant as we still have to work harder to win back the rakyat’s confidence,” he tweeted this evening.

Prior to this, Harapan was defeated in the Cameron Highlands and Semenyih by-elections. Next month, DAP would be defending its stronghold of Sandakan in Sabah in another by-election.

“Ignoring the Malays as the majority and being insensitive to Islamic sensitivities,” he tweeted.

On a sarcastic note, Syed Hamid appeared to suggest that Harapan should congratulate itself for bringing about Malay and Muslim unity and for paving the way for Umno and PAS to form a strong coalition to protect and safeguard Malay and Islamic rights.

The former minister said that as the government, Harapan cannot have a “tit-for-tat” attitude.

“Accept differences but shouldn't divide us. Ministers must lead by example. The election is over, focus on helping the rakyat.

“The mandate is with Harapan to test how you will bring fairness and justice to all but not vengeance. It can be done but tough,” he added.

Syed Hamid was responding to a Twitter user, who calls himself Don Gotti, commenting on Penang Deputy Chief Minister II P Ramasamy stating that multiracial seats are no longer safe for Harapan.

Following his remarks, the Twitter user, Don Gotti, who describes himself as a “born again BN supporter”, called on the former minister to “come back and support a reformed BN”.