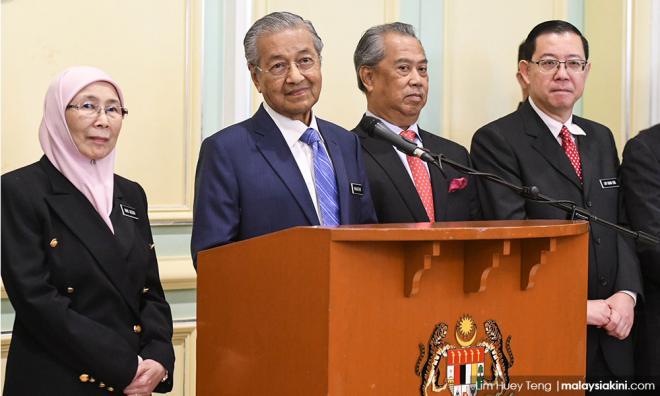 Dr Mahathir Mohamad admits he is now burdened with "three times more work" than during his first tenure as prime minister, due to the relative inexperience of his current cabinet lineup.

But as he told The Star in an interview published today, these new ministers are learning quickly and are constantly seeking his advice when making decisions.

"The burden of work is very heavy. Some letters written to me – I can only read them three months later, and (when) I find out what they are asking for, the date has passed. People ask me why I do not respond.

"I try to, but I can't finish my work. Even at night, there are people who come to see me, or I have to attend to something or other, which means I do not have time to implement.

"People come endlessly. They come to see me and overstay, and because of that, I cannot go home. At home, when I go back, I still find people in the house wanting me to do something," said the premier, who turns 94 in July.

'They cannot solve, they come to me'

On his cabinet, Mahathir said ministers seek his advice due to his experience of having been the prime minister for 22 years.

"Of course, the burden is heavy. What I am doing now is three times more than what I did when I was the prime minister for the first time.

"I have to work the whole day. Even if they do not disturb me, there are so many problems to be resolved, and some of my ministers are not familiar enough with the problems. They cannot solve, they come to me."

According to Mahathir, some in his cabinet are still stuck in an opposition mentality and criticise when they should be implementing policies as part of the government.

He also claimed that when his ministers come under fire – like Finance Minister Lim Guan Eng on matters pertaining to his previous stint as Penang chief minister – it affects Pakatan Harapan's ability to carry out its promises.

Nonetheless, he said the ministers show him "loyalty," as evidenced when they accede to his views when differences crop up among themselves, in order to project a united front.

"For example, I suggested there should be a vote, as there are two differing opinions in the cabinet – they said 'no vote'. I said if no vote, how do we decide which one? They said, we go according to what you say.

"So, there is quite a good loyalty (to the prime minister)."

Implementation should be 'faster'

With Harapan nearing its first anniversary in Putrajaya, the coalition has managed to resolve some of the country's major problems, Mahathir said. However, he admits things could be better.

"I would like to say we should go faster. We should be able to go faster, but there are so many constraints when we are dealing with finances. You borrow money and you don’t pay, you can be bankrupted.

"Countries have been bankrupted, but we have avoided that. The economy still grows by four-something percent.

"That, to me, is an achievement because, despite the fact that we have to deal with the big problems, the economy of the country is still doing well," he said, citing the billions of dollars of US investment since Harapan assumed federal power.

Asked about his administration's successes, Mahathir cited the ability of his coalition to work together, followed by its ability to deal with the country's financial problems without adverse impact on the people and the economy.

Mahathir also reiterated the difficulty of fully implementing all the pledges in Harapan's election manifesto.

Nonetheless, the premier expressed hope that the rakyat will give the ruling coalition another mandate in the next general election, after it rebuilds the economy, provides the people with jobs and improves business prospects.

"On that score, we think people will give us another chance to continue with our plans," he said.

When asked about what he wishes to see when he hands over the reins to his successor, Mahathir said Malaysia should be like the country it was during his first tenure.

"The country has obviously and physically grown. You see people moving into new areas of business, because things are going to change and your response must be quick.

"Nowadays, you talk about artificial intelligence and blockchain. You have to know something about that, for a man in my position, to resolve this problem or to apply this technology.

"You have to read also. I don’t have much time to read, but I do read to keep myself updated with the latest technologies."