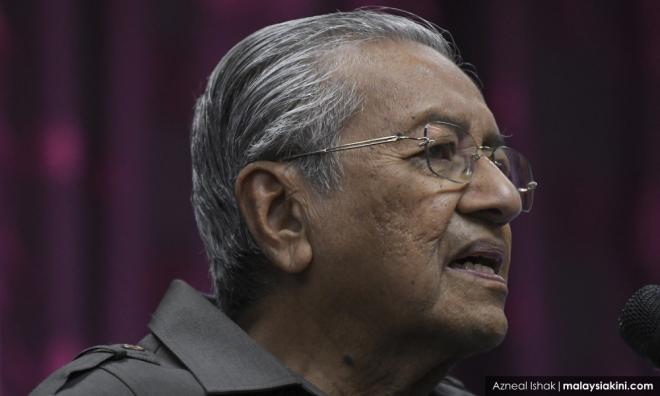 Dr Mahathir Mohamad is known for not mincing words, even when commenting on a subject which most consider sensitive, such as the Malay rulers.

The prime minister noted how people tend to give in to the rulers out of fear and respect, instead of holding them accountable for their actions.

"There is some inherent fear that something will happen to them if they carry out their work, and they try to avoid it.

"For example, if somebody is hit by a member of the royalty, instead of taking it to the courts, they try to cover up," he told The Star in an exclusive interview.

Mahathir said that despite curtailing royal immunity during his first tenure, the people – including elected lawmakers – are still apprehensive about questioning the wrongs allegedly committed by rulers.

"When the states accept the changes within the Federal Constitution, the states have to abide by the principle of the government by the people.

"To do that, you must have people who are able to say to the rulers, for example, this is wrong, this is against the law, this is not good for the country and all that. We find reluctance on the part of everyone to point out that this is wrong.

"For example, if the ruler takes land, confiscates land and all that, this has to go through the administrative process. The administrators dare not refuse. So, the land has been taken away from the people, wrong things were done – things that were against the law.

"But the enforcers, the executive wing, will not do anything. They will just comply. Because of that, at the moment, there is a government that (is) almost not democratic.

"It is the mentality of the people that this is sacrosanct and this is something above us and we cannot say no, even if wrong things are done," he said.

'People think they will get into trouble'

Citing the non-utilisation of the special court for rulers that was established in 1993, Mahathir said his attempts to correct the situation have gone "backwards".

"It was only used once (since 1993), but after that, it has never been used. Suppose somebody has been punched, it does not get to the court, even though they make reports. People think they will get into trouble if they do not comply.

"It goes (on) throughout the civil service, among politicians, among the government. They are reluctant to say anything that implies somebody (from the royalty) is doing something wrong."

Handling the issue is problematic, Mahathir acknowledged, especially when amending laws requires a two-thirds majority in Parliament, which his administration does not have.